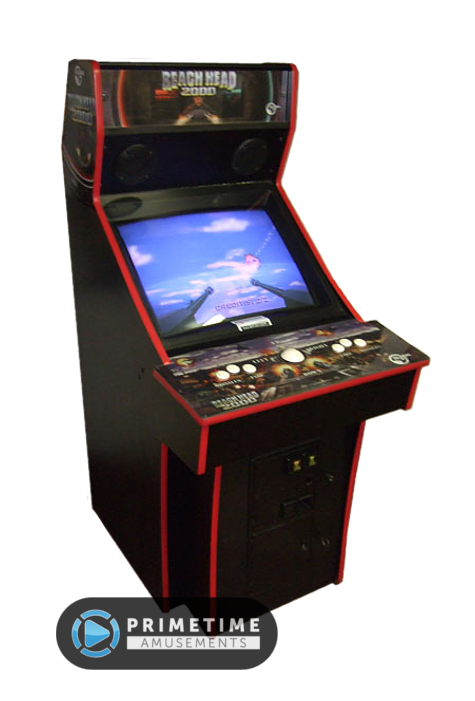 Beach Head 2000 by GlobalVR is a hard-core, nonstop action 3D shooter set in a photo-realistic and accurate war environment.

You are a soldier in a foxhole armed with a powerful turret. Hordes of enemies are storming your beach, you must fight back with 360 degrees of movement as they attack from the sea, land and air. Beach Head 2000 features 25 levels of nail biting action that increases in difficulty as you progress. Enemies include infantry soldiers, armored personnel carriers, deadly tanks, transport helicopters, heavy bombers and lightning fast attack jets. This game features real-life weapons, realistic physics, great graphics, and compelling action.

Beach Head 2000 was produced in several models including the kit upgrade (shown in the video below), trackball upright (pictured above), the Vortek V3 model, and the Tsunami Tsumo Motion model.

– Produced in a variety of compelling cabinet designs. Please ask about availability.

– Produced with both joystick and trackball controls

– GlobalVR’s Beach Head 2000 is no longer produced, having been released in 2000. Please call us about availability. All used models pass through PrimeTime Amusement’s “Certified Pre-Owned” program, which guarantees that the game will be completely refurbished and ready to operate upon arrival.