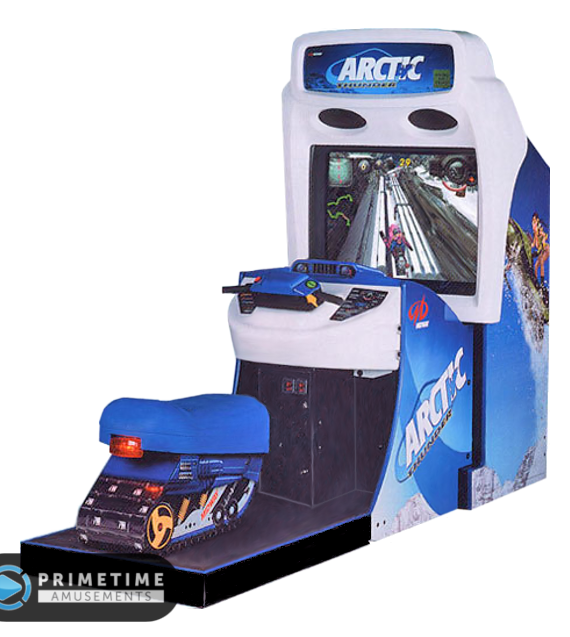 Arctic Thunder does for snowmobile racing what Midway’s Hydro Thunder did for boat racing.  Players chose from six different riders, each with their own attributes and personalities. Grab power-ups to gain the advantage including the ability to throw snowballs at your opponents! There are six point-to-point/open circuit tracks to race on including: Alaskan Pipeline, Chernobyl Meltdown, Blizzard in D.C., Haunted Forest, the Swiss Alps and a Lost Himalayan City.

Arctic Thunder was produced in both Standard (27″) and Deluxe (39″) monitor versions; it is capable of linking up to four units for exciting multiplayer fun. The software was the same between the games. As this game is only available used, please call about availability and pricing.

This was the last game produced by Midway Games before they pulled out of the arcade market.

REFURBISHED STOCK: 5/9/19! – An Arctic Thunder unit is currently available from a PrimeTime operated location in Florida. Each will go through our Certified Pre-Owned refurbishing program before shipping to you. Please call for pricing and lead time.

– Some models also included a wind blower to simulate acceleration

– Midway’s Arctic Thunder is no longer in production, having been released in 2002. Please call us about availability. All used models pass through PrimeTime Amusement’s “Certified Pre-Owned” program, which guarantees that the game will be completely refurbished and ready to operate upon arrival. Also ask about our game rentals!

Want to see Arctic Thunder in person? You can find it at the PrimeTime Arcade inside the X-Treme Action Park in Ft. Lauderdale, FL!