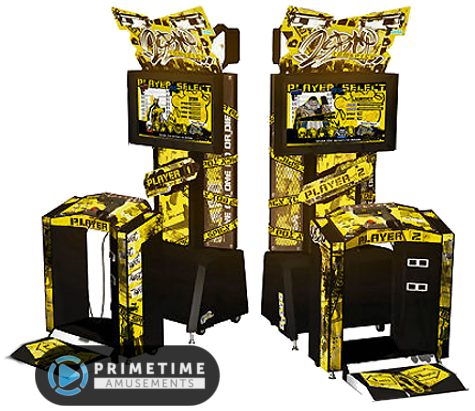 2 Spicy (also known as ‘Too Spicy’) is an innovative arcade title from Sega that features two linked game cabinets as players duke it out in gun battles. It’s almost like the Old West Shootout for today’s generation!

During each match, you face off against an opponent who is on the other side of an area such as the top of a building, train tracks, etc. Using the game’s Left & Right foot pedals, you move from cover to cover while taking opportunities to strike at your rival. You can’t put all of your faith into cover however – the environments are destructible, making the strategy of hiding one of limited success. If you can keep your aim on your opponent, it will zoom in to give you the chance at a powerful head shot.

2 Spicy features both a single player story mode and a Duel mode.

Thanks to this more open-movement gameplay, 2 Spicy really stands out among light-gun shooters.

– Unique shootout light-gun title that is exclusive to arcades

– Chose from multiple characters, each with different storylines

– Duel against a human player

– Sega’s 2 Spicy is no longer produced, having been released in 2007. Please call us about availability. All used models pass through PrimeTime Amusement’s “Certified Pre-Owned” program, which guarantees that the game will be completely refurbished and ready to operate upon arrival.

Check out 2Spicy in action: