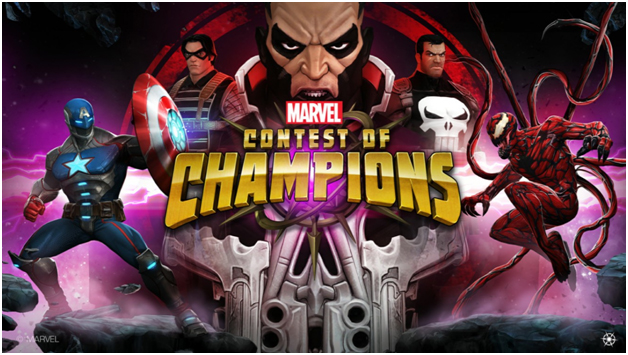 Ah, Marvel. A company name that elicits utter excitement in children, and a sense of wonder in millennials who are growing older, but are not yet at that point where they can’t sit down and enjoy an action-packed superhero flick. As with any great franchise, it’s inevitable that third-party companies would seek to create merchandise and all sorts of multimedia content about our favorite comic book heroes. Because of this, we are now able to enjoy their adventures in formats other than reading them in weekly-issued, panel-based illustrated novels (read: comic books).

Nevertheless, one arena where Marvel has had a mixed reaction in, barring a few exceptions on the arcade and some console games, is the video game industry. Due to a number of reasons related to either the developer, publishers, or a little bit of both, Marvel games have failed to capture the eye of the crowds of gamers like the films have managed to enrapture the droves of moviegoers that pour into the venue with each new premier. And this isn’t by lack of trying!

Ever since the advent and proliferation of video games back in the early ‘80s, there have been myriad games based on the adventures of our favorite costumed superhumans. At the very least, there have been more than 50 titles across a wide variety of platforms. From the old Atari 2600 back in the day, going through the Apple II computer, the Amstrad CPC, the Commodore 64, the famous NES and SNES, and even the most recent gaming consoles, the PlayStation 3 and 4, and the Xbox 360 and Xbox One have seen their fair share of superhero games. Meanwhile, the portable gaming market such as the Gameboy, the Gameboy Advance, and the Sony PSP, among others, have also been host to a number of games.

However, regardless of their proliferation across numerous consoles over the generations, Marvel games have failed to capture a wider audience, at least compared to the films. And while this fact might slowly be changing thanks to the success of the new Spiderman game on the PS4, these games still appeal to a niche of gamers around the world. 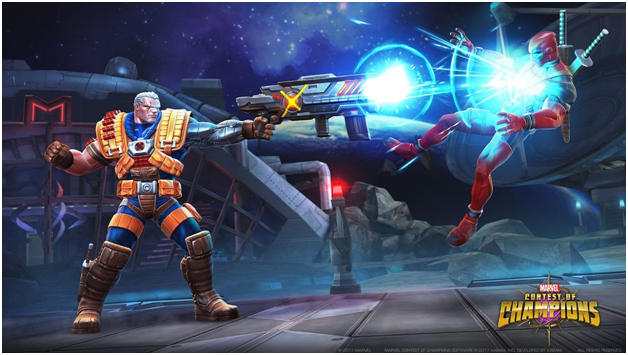 Fortunately for the crowds of enthusiasts that quietly celebrate each new title, there are many new games in the works, including title made for arcades, which is launching today across 122 Dave & Busters locations around the country.

That title is Marvel Contest of Champions. It consists of a fighting game that pits over 110 Marvel superheroes against each other in a competition to find the strongest champion and put an end to the Collector’s schemes once again.

With that being said, this is not a new game that has never been seen before; the concept first launched on Android and iOS devices back in 2013.

On mobile devices, this game plays like a watered-down fighting game in which players have to tap and swipe on the screen to unleash a series of light, medium, and heavy blows. Furthermore, by combining these inputs, the player can unleash combos against an unsuspecting enemy for massive damage. Additionally, by stringing hits, the player can slowly fill a super meter that, once full, can be used to unleash a super attack that does considerable damage.

However, while the concept of the game is solid and promising, it is hampered by the limitations of the mobile platform. Specifically, it suffers from lack of champion moves (they all attack and behave the same), and a very simplistic control scheme that fosters monotony and discourages stringing new combos or performing awesome plays. This could be worrying when speculating about the quality of the upcoming arcade title. Nevertheless, if history has proven something, is that fighting games hold a very special place in the arcades. In this sense, while the source game could be a bit barebones in the gameplay department, we’re confident that the arcade version will add a little extra “oomph” to it in the form of dedicated buttons for each move, possibly some inputs for special attacks, and unique animations for each fighter so that it feels that you’re actually playing something other than characters with the same jabs and kicks, but with different special attacks and passive abilities.

But don’t take our word for it!

Dave & Busters has unveiled that they are the creators and financial backers of this project, meaning that the game will only be found exclusively at their locations. This was initially discovered on Reddit, where a sheet with the specifications of the alleged arcade cabinet appeared. This confirmed that the game was being manufactured by Raw Thrills, thus sharing some similarities with the Injustice: Gods Among Us Arcade game. Both titles vend collectible trading cards, but as this cabinet image unveiled by Arcade Heroes shows, allows players to control their character by using a joystick. That was a feature sorely missing from Injustice, and could change up the dynamic of how this game works. 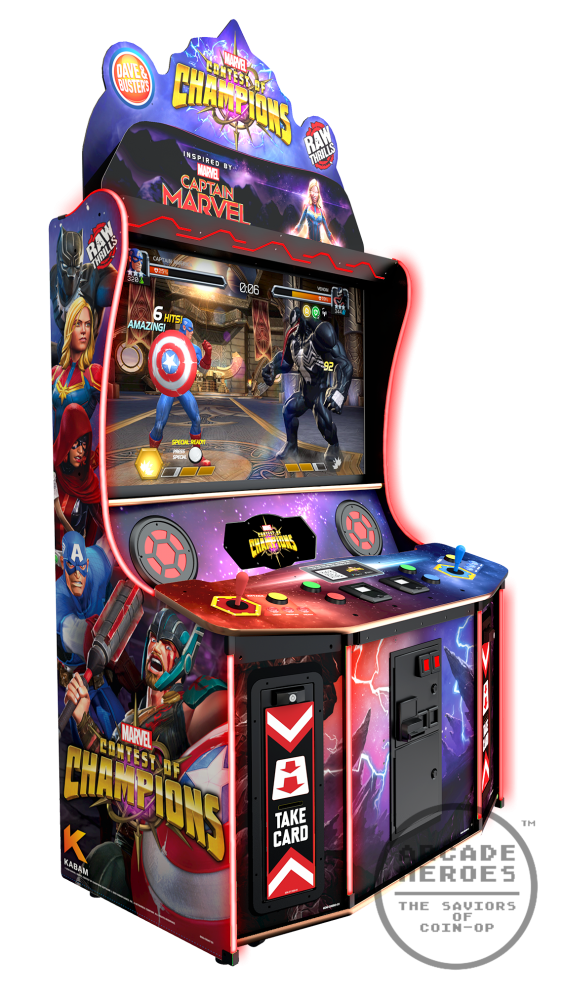 Whatever the future may hold in store for this franchise, we just hope it translates into an awesome arcade game!

If you want to learn more about the original Contest of Champions, you can download it on the Play Store. Alternatively, check out this video to discover some of the game’s most prominent features: