We’ve said it before and we’ll say it again, Arcade1Up is doing video gaming god’s work by bringing home beloved arcade games from the past up to modern-day standards, with awesome production value, and at a very affordable price tag. This time around, the team is releasing a Killer Instinct PRO Series cabinet, which just so happens to be packaged alongside Battletoads, another awesome classic from the ‘90s.

This upcoming cabinet is yet another addition to their series of products where they’re bringing classic arcade machines, redesigning them with slightly smaller profiles that can more easily fit in a modern gaming room, and selling them at a much lower price than typical arcade games. In other words, these are essentially home versions of our favorite arcade games from the past, but without losing the features that define arcade gaming, such as playing on a cabinet and with arcade buttons and joysticks.

The PRO Series, however, seems to be a new iteration of Arcade1Up products, standing tall  with a much larger form factor, akin to their original counterparts, and with a cabinet that features custom-designed unique artwork, a larger 19” LCD monitor (compared to the usual 17” that they use on other products), and a whole host of aesthetical bells and whistles to really drive home the nostalgia factor when enjoying these games.

In the product page description, the team advertises this new entry with the following:

“Kicking up the arcade experience to the pro level with our first ever PRO SERIES arcade cabinet.

“For many retrogamer enthusiasts, Killer Instinct™ is a definitive title of the mid ‘90s. Fans loved it, critics loved it. Its gameplay, soundtrack, and 3D-rendered graphics were all revered.

“And wow, do the Arcade1Up PRO SERIES specs make Killer Instinct™ a jaw-dropping addition to your home.

“For retrogaming “control freaks,” the PRO SERIES features upgraded joysticks and buttons from SuzoHapp and more generous spacing between components that improves precision.

“And yeah, Arcade1Up’s already gorgeous game machines get next-level aesthetics with the PRO SERIES. Eye-popping faux chrome trim runs around the cabinet edges, and a cosmetic 3D molded coin door with light-up coin slots for 1-2 player start really drives that nostalgia home. And of course, an upgraded light-up marquee is a fighting game beacon clear across the room.

With this new offering, players can go back and recapture the bone-crunching action of old Killer Instinct games, and not just one game, but TWO different entries in the KI franchise. In other words, the Killer Instinct PRO Series cabinet comes with both Killer Instinct and Killer Instinct 2, and players can swap freely between both of these at any moment. However, not content to stick to the main advertised product, Arcade1Up is also packing these games together with not one, but three versions of Battletoads; the one for the arcade, the one for the NES, and the Sega Genesis version. 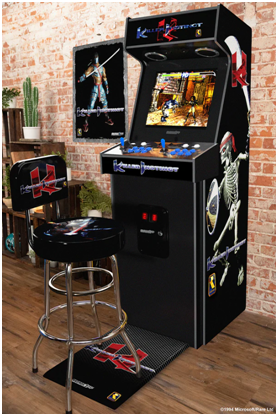 The best part about this new cabinet is that, despite a larger form factor than typical Arcade1Up products, it’s still quite affordable, compared to traditional arcade games. Case in point, the Killer Instinct PRO Series cabinet is releasing with an MSRP of $999,99. Moreover, the team is also releasing a standard edition Killer Instinct arcade machine for $499,99, which includes the same features as other games from the company, the most notable being the smaller screen and overall cabinet size.

Preorders for both the PRO series and the standard cabinets of Killer Instinct are now open, with the estimated shipping date beginning in early January 2023. These products tend to sell out pretty quickly, and considering that there will be only 500 PRO edition cabinets made, you’ll have to be fast if you want to get your hands on one!