It’s been a while since we last worked on one of these articles, but we’re back and ready for action!

Getting Good is our running series where, once or twice a month, we revisit the arcade games of our youth, and share some tips and tricks at how to beat them and improve your high scores. This time around, we’ll be talking about Nintendo’s Punch-Out!!, the highly-successful and critically acclaimed game that arguably reached peak fame when a reworked version landed on the NES. Said ‘port’ made many people believe that the game was originally from the said console.

However, Punch-Out!! actually started off in the arcade, which was developed and published by Nintendo in 1984. The game saw great success in arcades, which helped to turn it from a single game into a popular series of titles. However, it wasn’t until 1987 when it arrived on the NES as Mike Tyson’s Punch-Out!!, which was also a hugely popular entry for the series, and featured the eponymous boxer as the final boss.

When it comes to the game itself, it was initially considered a very unusual sight. The cabinet featured a dual monitor setup, with one screen placed vertically as opposed to horizontally. The top screen was used to display statistics and fighter information, while the bottom screen showed the game itself. Dual monitor setups were not very common at the time, and it was only due to Donkey Kong’s success that Nintendo was able to pull a game like this off. Since they had many televisions lying around after the Donkey Kong hyped had died down, the company tasked the developers with developing a game that used two monitors. With that being said, the team decided to create a boxing game where the top screen showed all the important info, while the bottom game screen showed the game in its full glory; free of obstructions such as score and time. 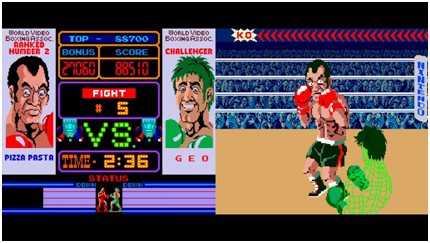 The rest, as they say, is history.

Keep in mind that, in this entry, we’ll be talking about the first Punch-Out! Which is not to be confused with Super Punch-Out! While the two are similar, they feature a different lineup of opponents, and the latter also gives players the ability to duck out of moves that can’t be blocked. 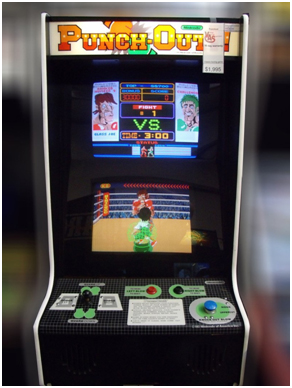 It’s important to consider your speed when it comes to launching punches, as different types of moves will leave you open and vulnerable for longer periods of time than others. The left jab is your weakest and fastest attack, followed by the right jab, the left body blow, and the right body blow. You will be using the left jab most of the time as it is the safest option available throughout the game. As a general rule of thumb, try to stick to left punches; they might be weaker than the right punches, but they are much faster.

By landing blows on your opponents and dodging their punches, you will slowly fill your KO meter. Once it is full and flashing, you can launch a KO punch that usually throws them down, and can seldom knock them out completely.

If you get knocked down, you’ll automatically get back up without any input requirement. Unlike the console version of this game, you don’t have to mash buttons to get back up. However, after the third time, you will not get up, and the match will be over. Throughout the entire game, you will be able to pay for a rematch against your opponent if you lose. However, if you lose twice, the game is over and you will have to start from the beginning.

The objective of the game is to go from literal nobody, to climb up the ranks of the boxing sport, and claim the title of World Champíon for yourself. To do this, you will have to fight a series of opponents, which increase in toughness and difficulty as you progress. After you beat the game once, you will be named World Champ, and the cycle will repeat until you eventually lose. However, after you become the champion, your opponents will be much tougher, faster, and will not telegraph their punches. Luckily, with this guide, you’ll know exactly how to beat each and every foe you come across on the ring.

There are 6 fighters that you’ll have to beat before winning the title of Champion. These foes are, in order of appearance (and toughness) Glass Joe, Piston Hurricane, Bald Bull, Kid Quick, Pizza Pasta, and Mr. Sandman, with the last one being the current champ you’ll have to steal the title from.

The first and easiest opponent that you’ll come across in the ring, which is understandably a good starting point for those who are not familiar with the game. 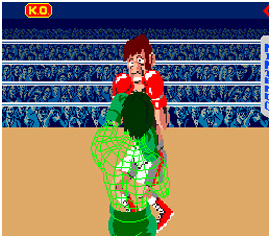 Joe can be defeated easily most of the time with sheer aggression as long as you know how to block and counterattack. You can easily block one of his jabs and then counter with your own, as your punches are much faster than his. You can even outpunch him at times since your blows can go over and cancel his. Joe is particularly open to attack when he’s launching his own strings since you can just easily land a hook, which will stun him briefly, and then keep on punching him until he’s down.

If you manage to knock down Glass Joe without getting hit once, he won’t even get back up; the match will be yours.

As we mentioned above, once you beat the game, you will receive the title of Champion, and then will be able to replay it with increased difficulty.

The second you fight against Joe is dramatically different than the first. He no longer leaves himself vulnerable as much, and he’s still quite slow to react. However, he learned a new move; a swift right cross that he does after you launch a left jab, which can’t be dodged or blocked. He won’t always throw it, but this means that leading with a left jab is far too risky now.

Finding an opening here is difficult. However, Joe is still vulnerable to body blows, and the best time to launch these punches is when he’s about to attack. If you launch a body blow while he’s throwing a jab or hook (before he actually throws the punch), you’ll connect with his body and deal some damage.

Nevertheless, his biggest weakness is still KO punches, as he will seldom dodge or block them. These moves are relatively safe to throw, compared to other punches, and will get you a long way with fighting against Glass Joe.

This is it for part 1 of our guide on Punch-Out! Stay tuned for part 2, where we’ll walk you through the rest of the game, up to the title fight against Mr. Sandman!