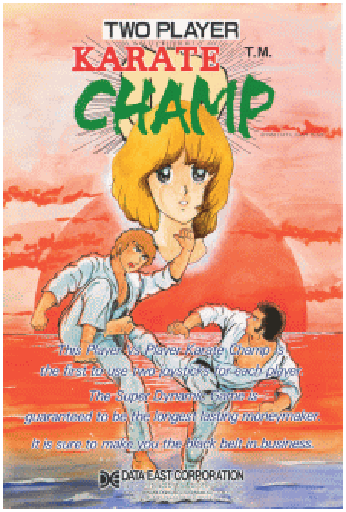 On other occasions, we’ve talked about fighting games and how they’ve, in a way, shaped the state of modern arcade gaming. At the very least, it’s fair to say that these games have created their own niche and fan following based around their mechanical complexity and tough-yet-rewarding gameplay. Not to mention the prizes and recognition that the player gets from winning one of the bigger tournaments like EVO.

However, it wasn’t always this way. In the earliest days of the genre, fighting games were often clunky, at best. The idea of stringing combos together or performing complex move sets simply weren’t a part of the equation. But they still could be fun, with a basic formula for pitting one human character against the other making do with the tech of the time. Karate Champ is one  product of its era, a veritable pioneer of the entire genre.

Developed in 1984 by Technos Japan, but produced and distributed by Data East, this game was among the first of its kind. It consists of fights where two characters face off in one-on-one regulated battles. The enemy could be either a CPU or another player, much like modern tournament fighting games. However, this is where the similarities with other fighting games ends as Karate Champ is a beast of its own kind.

In this article, we’re going to explain how to play this game, as well as how to win and set the high score on any of these machines.

Karate Champion revolves solely around 1v1 fights against the computer or another player. This is dependent upon the version of the game—whether the original or the seque(simply called the “Player vs. Player” version)l—the objective is either to score enough points at the end of the match, or to win a certain number of rounds to move to the next level.

Each match consists of rounds that end when one player manages to land a hit on the other. Depending on the technique, the execution, and the precision of the attack, the player is awarded either half a point, or an entire point. In the original game, the objective is to obtain 2 full points to end the match. Meanwhile, in the sequel, the objective is to win 2 rounds out of 3.

As an arcade game, the concept of scoring points is still very much present in Karate Champ. Each competitor is awarded points depending on their actions, the types of attacks they employ, and the precision of the blow when it connects. Depending on these factors, the player can earn as little as 100 points for a sloppy hit, or up to 1,000 points for a well-placed technical move. On the other hand, match points are awarded according to the total points receives for the attack. Any amount from 100 to 500 points counts as a half-point. Meanwhile, earning 600 or more points from an attack will award a full point.

In every match, there is also a clock constantly counting down. This clock starts at 30 and pauses after every round ends. If the time runs out and a winner has yet to be decided, the player with the most points will automatically win. However, if they are tied in points, the competitor with the most combined attack points (the points received from the technical complexity of the moves) will be the winner.

This part is where Karate Champ really shines and is the aspect that makes it stand out among the other fighting games. Instead of a stick for movement, and a set of buttons for unleashing several attacks, this game has two sticks. There are many attacks that the player can employ, which are unleashed through a combination of directional inputs on both sticks. The knowledge of these moves are what set the professionals apart from the regular players in this game. Therefore, learning what every move does, their hitboxes, as well as when to use each of them will become a pivotal aspect of mastering Karate Champ.

Sadly, there’s no easy way out here; you’ll need plenty of practice in order to determine the best moves to use in each situation. However, below you’ll find a handy table with all the directional inputs and their corresponding moves.

Karate Champ is a very technical game, akin to rock-papers-scissors in terms of execution. Nevertheless, it has an underlying element of strategy that favors those who take the time to learn the moves, as well as the best moments to unleash each of these. Luckily, with the table we placed above (thanks to the users and editors of StrategyWiki), you can start practicing your technique and become the true Karate Champ!