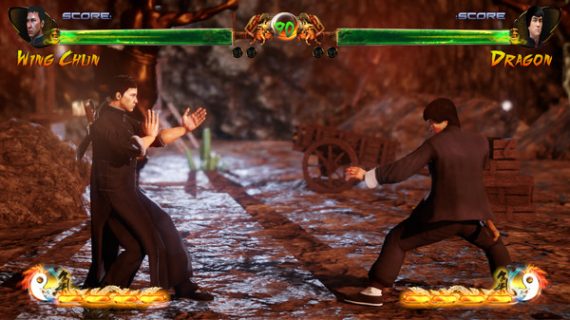 The Kung Fu Vs. Karate Champ

Fighting games once defined the landscape of arcades, while “kung fu movies” inspired millions. Now it is time for both to make a come back with The Kung Fu Vs. Karate Champ by Jae Lee and Exa-Arcadia.

Based upon the PC game Shaolin Vs. Wutang, The Kung Fu Vs. Karate Champ is here to make a mark in arcades with exclusive content and specially balanced game mechanics. This makes it unique from it’s console equivalent, and these features will remain exclusive to arcades.

The game itself is a “love letter” to classic kung fu movies of the 1970’s and 1980’s, starring a variety of characters who are in the likeness of the characters portrayed in those films. Pit a Bruce Lee look-a-like against a Chuck Norris one or Pai Mei against the Drunken Fist.  With a large roster of fighters, you’ll be able to make those classic battles of yore come alive.

Check out this early prototype build of The Kung Fu Vs. Karate Champ as seen at the California Extreme 2018 trade show by our friends at Arcade Heroes. The final build has many improvements over what is shown here.

This game was also designed to appeal to players of both casual and hardcore skill levels – you don’t have to be a tournament grade player to enjoy this. The fighting is realistic instead of magical (i.e. no flying fireballs), where some characters only use their feet and fists, while others may have a weapon. In this sense, the game is more similar to Virtua Fighter than Street Fighter.

NOTE: This game is ONLY available as a conversion kit, or conversion kit upgrade and is not available in a dedicated format. Cartridges have been designed for the EXA board by Exa-Arcadia and is not compatible with anything else. Please click here for more details on that system.

– 1-on-1 fighting is back in arcades, ready for casuals and hardcore players alike

– Has exclusive features NOT found on the PC version, including a unique character & stage

– Simple joystick/button controls, with four action buttons for players to use.

– Fantastic 3D graphics powered by the EXA Board

– During location tests at the Mikado Arcade in Japan (Dec. 2018), the game recorded #1 in earnings

– Stay tuned for additional games that will be available on the EXA platform!