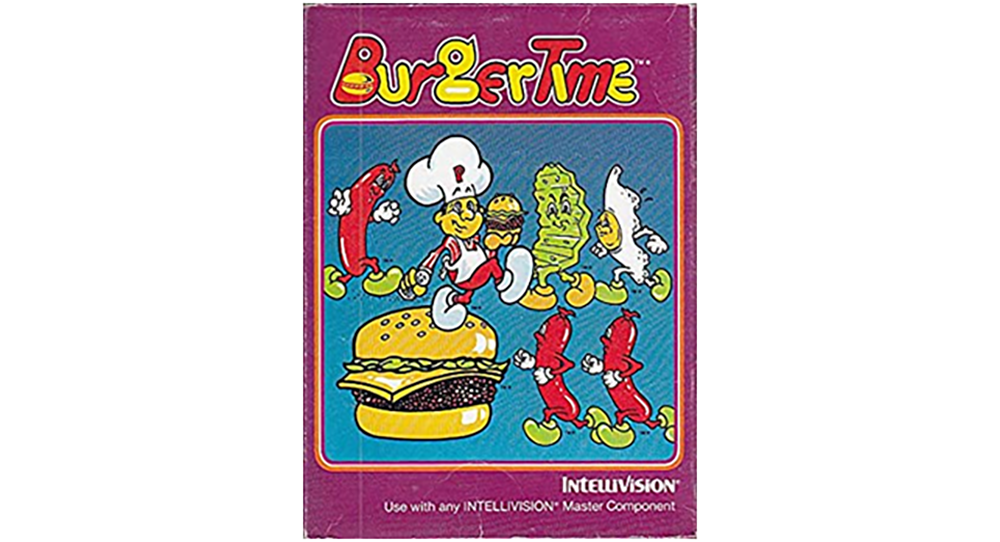 The year is 1982. You’re the awesome burger chef Peter Pepper, but the kitchen has gotten way out of hand! Now, it’s your duty to arm yourself with your trusty pepper powder, and get to cookin’!

BurgerTime was one of the most popular titles in the early ‘80s. Back when Pac-Man and Space Invaders were all the rage, Peter Pepper was running around his crazy kitchen, fleeing from rogue ingredients, and trying to put some delicious burgers together in time for dinner. The gameplay in BurgerTime, just like every other game of the time, is quite simple, yet very difficult to master.

In a nutshell, the objective of this title is to run around the kitchen avoiding enemies, and walking over the pieces of the hamburgers to make them fall, and eventually land in their platter. Every level has a different layout, and the ingredients per burger also vary, and can go from just a simple, three-piece burger, to a more elaborate burger with several layers of vegetables and other ingredients. The challenge here, of course, would be to make your way across the entire level, going up and down ladders to make the ingredients drop down, while avoiding the enemies that are always on your tail. 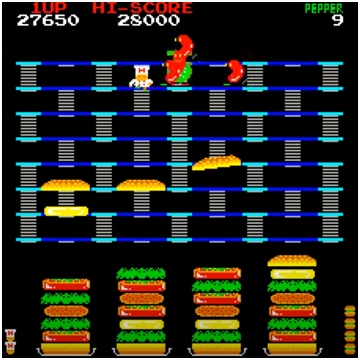 In this guide, we’re going to show you the basics of BurgerTime, as well as share a few tips to boost your score.

There are many colorful characters in BurgerTime, including the protagonist chef Peter Pepper, as well as all the many nasty ingredients that chase him around the levels. These characters include the following:

BurgerTime, like most games of the time, is fairly straightforward. It’s perhaps even simpler than other titles since the enemy behavior is the same for all enemy types, which makes it a matter of learning how they function, and simply avoiding their routes when running around the stage. In this sense, we’re going to jump right ahead into a few tips and tricks to improve your skills in this game:

Pick Up the Pepper Bonus Whenever You Can

As you’re walking on the burger pieces and making them fall onto the silver platter underneath, you’ll slowly start putting them together. Every stage has a number of burgers you need to complete, and when you knock down an ingredient one level, a bonus item may appear. When picked up, these will give you points and an extra charge of pepper. These bonus items change according to the level, and grant different number of points: 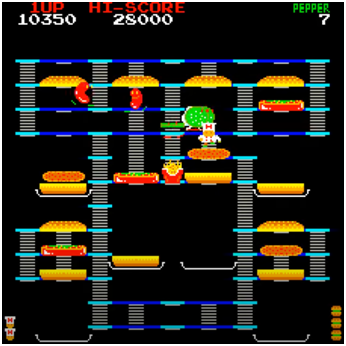 If not for the points, having extra charges of pepper can really come in handy as this item can be used to paralyzed all enemies in the target direction, allowing you to safely pass through.

Even though Chef Pepper is mostly defenseless against the encroaching veggies, it’s possible to eliminate your enemies by baiting them into walking beneath a burger ingredient, and then making it fall on top of them. Crushing enemies in this way will eliminate them from the field and grant you tons of points. The bonus you get from these actions is doubled for each enemy you crush with a single ingredient:

Mastering the art of baiting and crushing enemies is the key to setting the highest scores in BurgerTime. 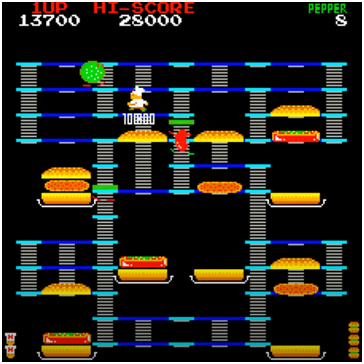 Concentrate on the Top Bun

While it’s possible to walk over every single ingredient to knock them down individually, you can focus on the top bun exclusively since, every time this ingredient falls, it will push down every other ingredient beneath it. This is one of the fastest ways to assemble burgers, which is worth the effort if you’re looking to complete stages in record time.

Save Your Pepper for Emergencies

Chef Pepper’s only way of defending himself against his enemies is by blowing pepper powder on them, which stuns them for a few seconds and allows the chef to walk through them. This doesn’t actually hurt the enemies in any way, but lets him slip through and escape from situations that would otherwise lead to losing a life.

Pepper, however, is exceedingly difficult to replenish, particularly since the only way to do so is by picking up bonus items as soon as they spawn. This is quite challenging as you not only have to climb to the item, but you also need to avoid the enemies along the way. More often than not, you won’t even have time to pick up the item. For this reason, always try to conserve your pepper; you’ll need them for when the enemies start speeding up, which happens from stage 28 and onward.

Just like with many other games of the time, getting good at BurgerTime is all about practice, trial and error, and memorizing stage layouts and enemy movement patterns. The more you play it, the better you’ll get. However, with these tips and tricks, you’re now ready for everything that stands in your way!