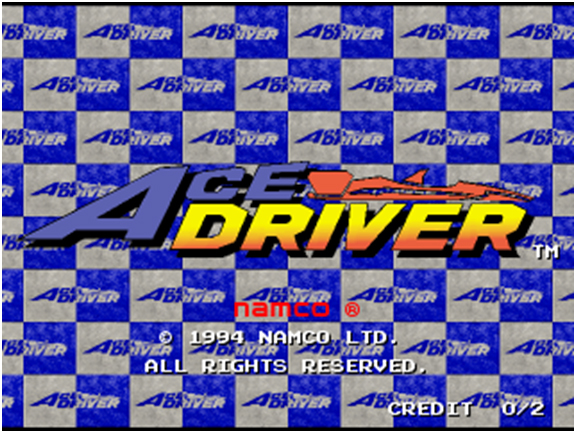 It’s that time of the month again where we take one old-school arcade game and show you the ropes on how to beat it and get the best high scores!

This time, we’ll be focusing on Ace Driver, a Formula One racing game produced by Namco in 1994. At its peak, this game was very famous, winning the Best Coin-Op Game of the 76th Annual IAAPA Show, as well as spawning two sequels in the same series. Ace Driver plays just like any arcade driving game does, with the player sitting down in the driver’s seat and steering their vehicle with the wheel. The Formula One style play is reminiscent of Namco’s beloved classic Pole Position, but in Ace Driver you get everything in glorious 3D. Besides the standard gas pedal, players also had a brake pedal and a clutch pedal. Depending on the type of transmission that they selected, the players would need to interact with the latter shifting gears as the situation demanded.

Without further ado, let’s get started with how to beat and master this awesome game!

As we mentioned above, the player can interact with several objects in the cabinet to control their car. While most of this is self-explanatory, the only thing that can change slightly per playthrough whether the player has to manage the gear shifts manually, as this option is selected right after the coin is inserted into the machine.

Nevertheless, let’s go ahead and list all the controls in this game:

After choosing your transmission type, you will be presented with a class select screen where you can set the difficulty of CPU cars to either Beginner or Expert class. Please note that the Expert Pro is an additional difficulty class that can only be chosen if all the other players also select it on their machines. Otherwise, the game will automatically set itself to Beginner for all players.

Once both transmission types and class have been selected, the player will be presented with a short scene where the driver enters his car. At this moment, every other player can insert their coins to join the race as competitors. Once everybody joins, or the cutscene ends, the race will begin. 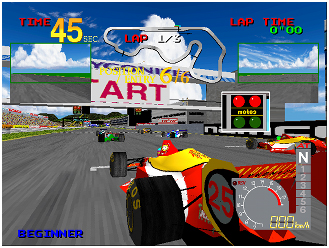 While the gameplay itself is pretty straightforward (pedals for accelerating, slowing down, shifting gears; wheel for steering), there are some tips and tricks you can keep under your sleeve to improve your odds of success, especially when there are more human players involved and the CPU rubberbanding is not much of an issue. For example, while the brakes are a good option for those sharp hairpin turns, sometimes it might not even be necessary. In most corners of the track, you can get by without crashing by releasing the gas a few seconds before the curve. In this manner, you’ll breeze through and conserve your speed.

Another good tip for taking is, just like in real racing, to ease off the gas about 2 seconds before the curve, and try to make the turn on the outer edge. However, just as you’re in the curve, try to transition towards the inner side, and step on the gas as you get past the apex of the turn. In this manner, you can take the corner much faster, and accelerate much sooner than by trying to make the turn entirely in its outer or inner edge.

These races are usually over before they even begin. The cars are fast, the track is short, and everyone’s just careening down the course. With these two quick but vital tips, you can take your game to the next level, and kick some butt on the track.

The Basics of Fighting Games