We’ve talked about how to get good at 1943: The Battle of Midway, which is one of the most famous shoot ‘em ups developed by Capcom. In that article, we mentioned how that title was the result of Capcom’s efforts to distinguish themselves as game developers. Nevertheless, that game wouldn’t have existed at all if it weren’t for 1942.

Released in 1984, fans and critics alike regarded this game as one of the most groundbreaking titles of its time, which allowed Capcom to mark their territory in the field of video games. It was one of the company’s first games, designed by Yoshiki Okamoto, who would later create the influential Street Fighter (1987). For its part, 1942 would become one of the most influential titles in the genre, offering vertical scrolling and non-stop action back when players were still used to single screen shoot ‘em ups like Space Invaders or Asteroids.

1942 puts the player in the cockpit of a Lockheed P-38 Lightning dubbed the “Super Ace.” Players had to maneuver through a series of stages while shooting down as many enemy aircraft as they can to rack up points. The objective was to fly through several battlezones, taking down foes and, eventually, destroying the entire Japanese Air Fleet.

Much like Namco’s Xevious, the stages in 1942 are played in a vertical-scrolling shoot ‘em up format where enemies zoom in and out of the screen in formation, shooting at the player, while they must try their best to avoid enemy fire and try to take down as many enemies as possible. At times, the player may encounter a bigger enemy aircraft, which takes more shots to take down, and which grants more points upon destruction. Furthermore, at the end of each stage, the player must fight against a boss that guards the passage to the next level. 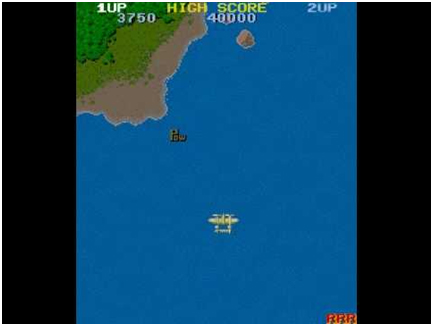 Aside from shooting a constant stream of infinite bullets, the player may also perform a series of evasive loops to avoid all enemy fire during the animation. These loops are limited, however, and must be used only in case of an emergency.

In this brief guide, we’ll tell you all you need to know about this game, as well as share several tips and tricks to increase your score and destroy the enemy fleet once and for all!

1942 features an intuitive control scheme with only a joystick and 2 action buttons. The joystick is used for moving the plane across the screen in any of the possible eight directions. Meanwhile, the buttons are used for various purposes, such as shooting and performing evasive maneuvers. Keep in mind that the player begins only with a double-barrel gun. However, by picking up upgrades, they can eventually transform it into a quad-barrel gun, doubling its firepower and covering a wider area. Furthermore, while limited, the evasive maneuvers render the player completely invulnerable while the animation is playing out, and is perfect for the moments where you need a breather from dodging projectiles, or for when you’re about to be hit by a stray shot.

As we mentioned above, the game features a variety of enemies of different shapes and sizes. These enemies are divided into two colors and two sizes, gray and green, and small and medium. The boss planes, on the other hand, are divided into green and gray only, as each of these is different from the others.

The small enemies encompass most enemy forces in the entire game. Gray enemies usually appear from the top of the screen before performing their unique animations and exiting the screen. The green enemies generally emerge from the sides, zoom around the screen for a bit, and then exit once again. The medium variety of enemies behave similar to their smaller counterparts but take more hits to destroy. However, at points, these medium enemies may fly in in full formations that require you to stick to the side to outmaneuver and get behind them before delivering the hurt. 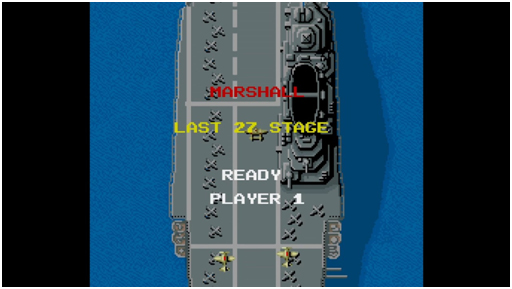 As you progress, you will encounter medium enemies with more frequency, which is a chance to increase your score even further, especially in “%” stages where enemies don’t shoot at you.

Every eight stages, you will encounter a “boss” plane, which are the largest aircrafts in the game, and take substantially more damage to defeat. The first three bosses are green, while the final boss plane, “Ayako,” is gray. These boss planes are very wide, which makes it easy to hit them and shoot their projectiles in wide arcs, which makes them difficult to dodge. As a general rule of thumb, you’ll want to save your loops for these fights and use them only when you can’t possibly avoid a spray of projectiles headed your way.

Rather than a walkthrough, this game merits sharing general guidelines to stay safe while racking up the points.

Instead of increasing in number, the stages in this game down from 39, all the way to 1. Furthermore, from stage 29, every four stages will be a “%” stage, which gives the player lots of opportunities to increase their scores as enemies don’t fire back at all in these levels. The larger planes will still shoot occasionally but, since smaller enemies are the most common type, you’ll always remain relatively safe from hostile fire.

Keep your plane in view at all times; never lose sight of it as this is a surefire way to run into a stray bullet. Keep in mind that your hitbox only encompasses the inner frame and propellers of the plane; the front wings are invulnerable and can pass through stuff unharmed.

One last tip to maximize your score is the fact that some stages award bonuses for performance, including destroying a percentage of enemy planes, while also saving your evasive loops. In this sense, try to shoot down every hostile aircraft, and learn to refine your movements so you can evade without relying too much on the loops. In this sense, you will effectively maximize your score while keeping safe in the process.