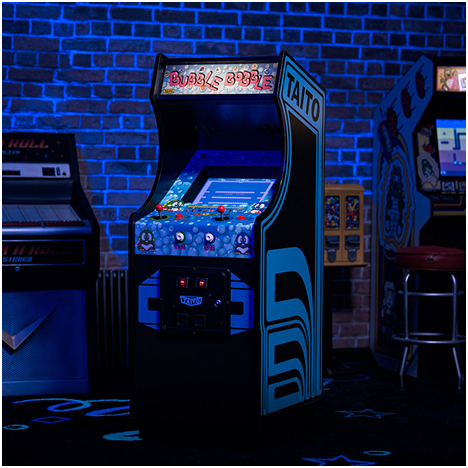 Bubble Bobble is a classic arcade game released by Taito in 1986, and like most arcade games of its era, it features simple yet very addictive gameplay that was easy to pick up and play, but quite difficult to master. The game itself needs no explanation, but we can safely say that it was popular enough to get ported to many, many consoles—over thirteen of them, in fact. It seemed like everyone wanted to get a piece of the popular bubble dragons Bub and Bob.

To celebrate the game’s 35th anniversary, arcade game manufacturer Numskull has designed a brand new quarter arcade replica of Bubble Bobble, at a 1/6  scale of the original, but featuring all the arcade goodness that once catapulted it into mainstream appeal. But while this cabinet would be a replica of Taito’s original, it also featured a few changes to modernize its appearance, including a brand new cabinet design. And just like many others in Numskull’s Quarter Arcade series, the miniature cabinet is completely playable, although you would probably struggle to fit two players in front of the small device.

On Numskull’s website, they describe this new product with the following:

Numskull Designs is incredibly proud to team up with Taito for the eighth instalment in its Quarter Arcades range! One of the world’s most recognisable, iconic arcade games, and our most-requested addition by fans, Bubble Bobble stars the Bubble Dragons in their quests to complete the 100 levels of the Cave of Monsters and save their girlfriends. As well as being one of the first games to feature multiple endings, Bubble Bobble is amazingly fun in both single-player and co-op mode.

This official, fully playable, highly collectible ¼ scale replica features our first ever dual-joystick gameplay, authentic to the classic game. Due to the original not having a dedicated cabinet design, we’ve worked closely with Taito to create this one of a kind cabinet – featuring the original ROM and artwork, as well as official marquee, bezel, and control panel artwork from Taito designers. This collectible miniaturises the classic in an official, authentic way for the very first time, providing a dedicated cabinet long sought after by fans. 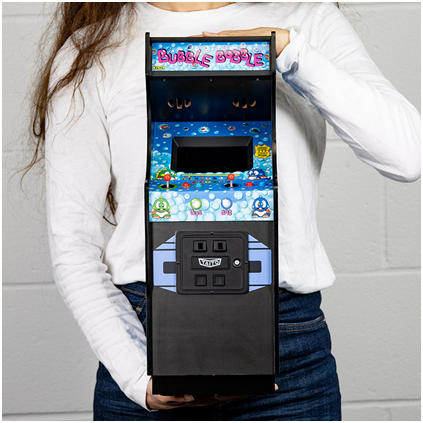 The Bubble Bobble Quarter Arcade cabinet is already available for purchase via several retailers including Just Geek and GameStop in the US, and across other storefronts across the world, at a very accessible MSRP of  $180.