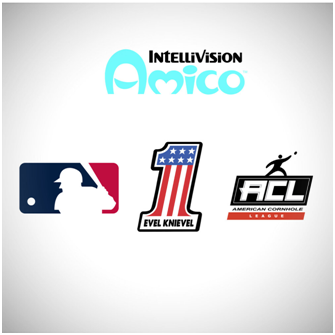 It’s been a while since we last wrote about the Intellivision Amico, the upcoming home console spearheaded by Tommy Tallarico that aims to provide a modern take on the old classics of yore. And when we say “modern take”, we don’t mean just remasters or adaptations (as the Amico will have its share of those titles), but in gameplay style – games that are easy to learn, but difficult to master, like we used to play in early arcades and on 80s game consoles.

We won’t go into details about the console itself since we’ve already covered all the basics in a couple of articles. Suffice to say that it looks absolutely fantastic, boasting many awesome features as well as a vast library of exclusive games inspired by the arcade classics of our youth.

New Arrivals to the Intellivision

However, the already-promising catalog of games just got even better as Intellivision announced in a press release that they have acquired several new licenses to expand their repertoire of sports games.

These licenses include titles such as Baseball alongside the MLB; an extreme motorcycling title inspired by legendary daredevil Evel Kneivel, using a license from the Kneivel family, and developed alongside Barnstorm Games, and a Conrhole Game developed with license from the American Cornhole League.

Sadly, there hasn’t been much in the way of footage or images floating around just yet, but the press release sheds more light on the features of each game. Here’s what the company announced a few weeks ago:

IRVINE, Calif. – July 16, 2020 – Intellivision Entertainment LLC, the video game industry pioneer, announced today several of their latest licensing agreements, which focus on sports-themed games, include Major League Baseball, Evel Knievel, and the American Cornhole League. These partnerships bring additional highly-recognized brands to Intellivision Amico™ through a series of officially licensed games that are simple and fun for the whole family.

“My early memories of playing the original Intellivision Major League Baseball game with my dad and brother helped inspire our vision to launch Amico,” said Intellivision CEO and President, Tommy Tallarico. “Looking to the future, Intellivision is proud to offer a wide breadth of content for everyone in the family to enjoy from favorite sports and recreational games to thrilling, daredevil action. We continue to diversify our portfolio and gameplay experiences for Amico.”

The licensing deal between MLB and Intellivision comes 41 years after the two groups launched their first partnership. That historic collaboration represented the first video game license with a professional sports league – a pioneering trend in the industry that Intellivision embraced across almost every sport. Unlike anything available at the time, Intellivision’s Major League Baseball™ game was the first home video game ever to feature spoken voice (e.g. “YER OUT!”). The original Major League Baseball is the best-selling Intellivision game of all time with approximately one in three Intellivision households owning the title. Bringing yet another first to the baseball video game industry, Intellivision’s MLB licensed game will introduce a competitive play option. This option will allow multiple players to join in the fun and set up head-to-head competition in different ways or all versus the computer. All 30 current MLB teams will be featured.

“Baseball video games have brought family and friends together for more than 40 years. Our renewed partnership with Intellivision continues that tradition with simplicity and fun for the whole family,” said Senior Vice President, Games and VR, Jamie Leece. “We look forward to joining Intellivision with the shared mission of bringing family and friends together with the love of the game and passion for our sport.”

Paying homage to the Knievel legacy, Intellivision is working with the Evel Knievel Family and Barnstorm Games to bring an exciting multiplayer game to the Amico platform. The updated version of the Evel Knievel game will feature enhanced graphics, sound, and art, plus a variety of multiplayer options utilizing Amico’s unique controllers. In addition to new levels and gameplay features, more action such as the Skycycle X-2 rocket that was used in his infamous Snake River Canyon jump in 1974 will be added.

“My dad was a larger than life character who was a hero and inspiration to millions of people,”’ said Kelly Knievel, son of Evel Knievel. “We are excited to work with Intellivision to keep his legacy alive, introduce his bold spirit to a new generation of fans, and take the thrill of the jump from the arena to the living room on Amico.”

Developed exclusively for the Amico system with some of the world’s greatest professional cornhole players, the American Cornhole League, which has been broadcast on ESPN since 2016, is bringing America’s fastest-growing recreational sport into the living room. With the intention of providing a game for everyone in the family, regardless of skill level, users can utilize the unique Amico controller with touchscreen and motion controls.  Gameplay is available in career, arcade, multiplayer, or free play mode and features over 100 unlockables, multiple challenges, skill levels and ways to play – no summer BBQ picnic required.

“We are thrilled to work alongside Intellivision and some of the world’s greatest players and to bring cornhole to the Amico console,” said Stacey Moore, Commissioner and Founder of the American Cornhole League. “We cannot wait for people to experience throwing ACL virtual bags in the comfort of their own home.”

Intellivision is currently working on many more exciting partnerships in preparation for the Amico system launch. For more information please visit www.IntellivisionAmico.com.

Thanks to these additions, the Intellivision Amico looks more promising than ever. Even if you’re not a fan of sports games, there are already a wide slew of promising titles. The console is expected to retail somewhere between $200-$250, with the games costing around $2 – $10 each. With that in mind, it seems that this is going to be the most fun we can have, either with friends and a few party games, or by ourselves when trying to break records.