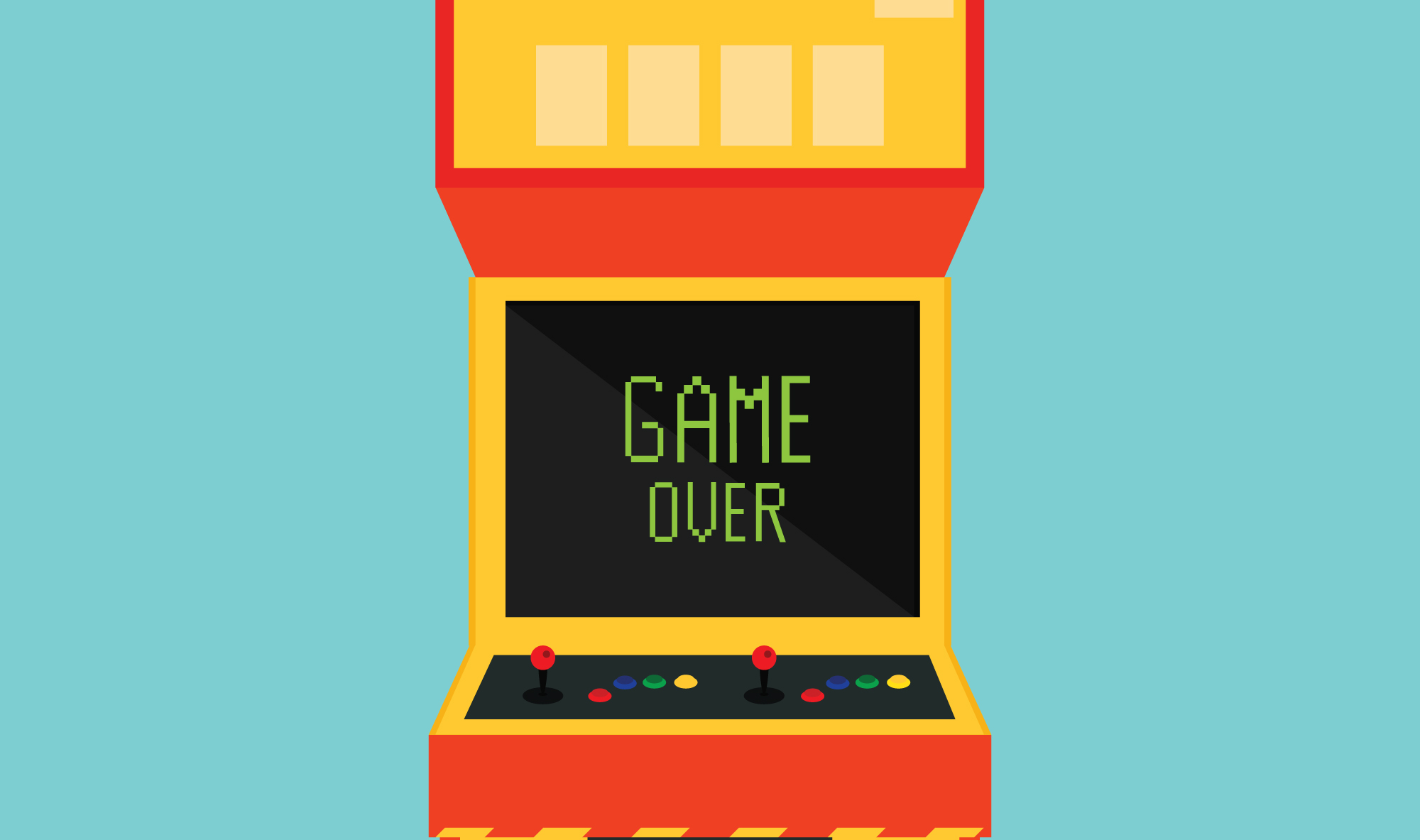 In our previous articles, we’ve dedicated quite a bit of time and effort to show you the very best video games the arcade industry has to offer. However, similar to other forms of art, arcade gaming also has its fair share of mediocre (or outright bad) titles, which are understandably less-known than their high-quality counterparts. This is because, unlike console games, if an arcade cabinet is bad, the users can simply stop playing and cut their losses, eventually condemning the game to its doom if it garners enough bad reputation. On the other hand, bad console or PC games are usually more noteworthy since the gamers will have most likely spent $60 or more to purchase it, and will likely be content to openly express their disdain on the internet.

Regardless of their infamy, the fact remains that there are definitely bad games on the arcade, some of which even border on hilarity. So, in the spirit of keeping things lively, let’s all make fun of these games which, in many cases, are some of the worst that arcade has to offer. Keep in mind that there will be obvious spoilers about the games mentioned in this list, and that some of them also feature content that may not be appropriate for children. So, if you’re spoiler-sensitive, or are in the company of minors, consider this your warning!

Without further ado, let’s get started.

In the early 50’s there existed a show where 2 contestants were pitted against each other in a battle to prove which one has more knowledge about popular songs. The show was called Name That Tune and was the brainchild of Harry Salter and his wife, Roberta. The program originally ran from 1953, to 1959, and attained the 30th place in audience rating for the 1956-1957 season. It also received several syndicated runnings in several periods from the early 70’s to mid 80’s, all of which were received very well by the general audience. 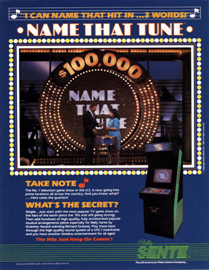 The arcade version of this show consisted of a simple vertical cabinet developed by Owen Rubin, and released by Bally Sente, a popular arcade game developer and publisher at the time. The game was somewhat true to the source material; the players were presented with a series of sound bits, from which they had to identify the song they belong to, and rack up points from correct guesses. The player had to gather 18,000 points using the game’s different modes. The game rewarded several bonuses for identifying songs in the shortest possible time.

As far as arcade machines go, this one is very simple, even more so when compared to other games at the time. However, the reason why this game is featured on this list isn’t because of the bland gameplay, but rather because of the huge amount of artificial difficulty that stems from the machine’s inability to produce proper sound. Due to the game’s dependance on synthesized music, players would often have a hard time guessing which songs the sound bits belonged to. These drawbacks have earned Name That Tune a score of 2 out of 100 on census ownership records.

This arcade game is an odd specimen indeed. Developed by Sanritsu in the early 80’s, this cabinet features an interesting take on the classic card memory game. The gameplay consists mainly of navigating across a darkened grid of cards, and using the button to flip the cards that are directly below the player, upon which he or she can receive the benefits (or hazards) shown in said cards, which can be either points, bombs, pitfalls, or frogs. The objective of Dream Shopper is to flip enough cards to fulfill the point requirement of each stage.

On top of the regular gameplay, there are several enemies that also chase the player and that, upon colliding with him, take away a life. The other hazards such as the aforementioned bombs and pitfalls also take a life if the player falls victim to one of them. On the other hand, if the player uncovers a frog hiding beneath a card, the animal will jump across several other cards, flipping them and granting the player points depending on the amount of cards uncovered, as well as the color of the frog in question. The apple in the center can be eaten once per stage by the player to illuminate the board for a few seconds.

As you can see, the difficulty factor of this game stems from the fact that the player must commit to memory the location of the hazards, as well as the most valuable cards at the beginning of each match, right before the board darkens. There’s only so much the player can achieve by relying on the apple, so memory is key. However, for all its mechanics, the game ultimately comes off as bland, and somewhat of a Pac-Man clone, because of the enemies that constantly follow you around around each board.

There’s really not much to say about this game; it’s Hangman. Have you ever played Hangman with your friends on a piece of paper? If so, then you’ve literally already played Hangman on the Arcade. This game was manufactured by Status, and consisted of a simple vertical cabinet with a CRT screen. Gameplay revolved around the players choosing letters of the alphabet to progressively uncover the words provided by the computer. As the player makes mistakes, a part of a stick figure is drawn into a box on the top. If the player makes enough mistakes to complete the stick figure, it is then promptly hanged by a pair of boots wearing a top hat.

Compared to the other games available at the time, Hangman was a very bland experience and, consequently, was promptly forgotten by gamers. The census ownership records failed to provide a rating for this game, seeing as nearly no reported users actually own the cabinet.

This game is a classic example of when gore and violence in a video game go too far. Games like Mortal Kombat use blood and fatalities only to cause hilarity among the users due to their cartoonish looks and sound effects. In direct contrast to this, Chiller strikes a little too close to home, by featuring true-to-life graphics (for the time), as well as detailed dismemberment and bloody visuals, accompanied by blood-curdling screams every time a person gets shot or struck by one of the game’s many torture devices. 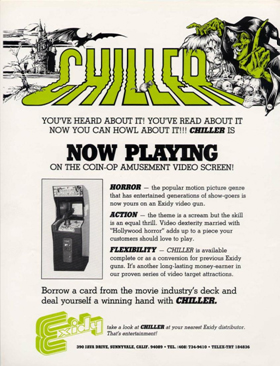 The gameplay of Chiller consists mainly of using the gun to shoot various targets that appear on the screen which include bound people, decapitated heads, and torture devices. Upon shooting several special targets, like the aforementioned torture devices, the player is treated to scenes where the bound people are decapitated in the case of the guillotines, their heads crushed by vises, or the bodies torn in two by torture racks. In short, it’s a really gruesome experience that definitely earned its 6 out of 100 rating on census ownership records.

Let’s get something straight right off the bat: Mortal Kombat was a GREAT game. Heck it still is; the release of Mortal Kombat X for the latest generation of consoles was received with great praise by both long-time fans as well as newcomers to the series. The combination of smooth gameplay, with excellent graphics, as well as top-notch animations have earned this game a well-earned spot on the list of best fighting games ever made. Because of this, it’s expected that several copycat game emerge, trying desperately to coast on Mortal Kombat’s fame. Survival Arts is one of such games, developed by Sammy and released in 1993.

Survival Arts is NOT a good game by any means, and the fact that it managed to pass the testing phase and got into mass production is a baffling fact in itself. Similar to Mortal Kombat, this game uses digitized actors as its fighter sprites. However, unlike the source material this game directly ripped off from, the animations are not smooth at all, and the controls even less so. Survival Arts is plagued by a plethora of visual glitches, broken and easily exploitable AI, and some ridiculously absurd design choices in each of its characters.

Unfortunately, there isn’t really anything we can say that would really give justice to this game’s terribleness. So, we’ll just leave this video review made by a very eloquent Youtube user. Enjoy! 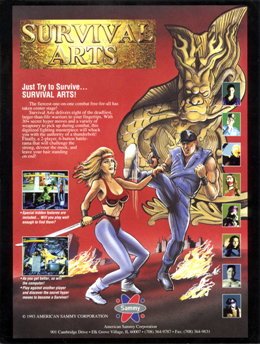 As the war on drugs that was pioneered by former president Ronald Reagan started gaining momentum, the message that recreational drugs, in all its forms and presentations, were bad started seeping into any and all forms of entertainment available to every 80’s kid in the nation. For arcade-goers, this meant that they had to stare at a big “WARNING: DRUGS ARE BAD” screen for a few seconds every time they started up a game.

However, for some people, this warning wasn’t enough, so they went on to develop and sell video games whose sole purpose was to further the cause of the war on drugs. This was the main reason behind the creation of infamous games like Wally Bear and the No Gang (NES), and NARC (Arcade), which are renowned either for their rudimentary, unforgiving and inconsistent gameplay for the former, and gratuitous violence, gore, and absurd levels of preachiness for the latter. 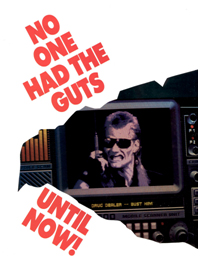 NARC puts you in the role of Max Force and Hit Man on an adventure to take down the notorious K.R.A.K drug syndicate led by Mr. Big. Gameplay consists of mostly side-scrolling shoot em’ up themes, where the protagonists, armed with machine guns and rocket launchers, blast their way through hordes of thugs, drug dealers and henchmen on their quest to take down the aforementioned drug lord. The levels are mostly linear and revolve around constantly firing your weapons to keep the enemies at bay. Despite looking graphically advanced for the time, the appeal of blowing up enemies while walking left to right to complete each stage quickly wore off, and the game fell into infamy for its bland gameplay, as well as its excessive gore when dispatching enemies. Nevertheless, the game earned a 21 out of 100 on the census ownership records, which is actually awesome at least when compared to the other titles on this list.

So there you have it, 5+1 of the worst arcade games in the industry. Can you come up with any titles to add to the list? Then feel free to leave a comment on the section below!

Here at PrimeTime Amusements, we strive to provide the very best solutions in arcade game sales and rentals. If you’re looking for a machine or service in particular, feel free to give us a call at 1.800.550.0090 or visit us at 5300 Powerline Rd. Suite 210, Ft. Lauderdale, FL 33309.