Ever since the early 70’s, arcade games have been bringing us timeless masterpieces which, even by today’s standards, are lauded as being the fundamental cornerstones of modern video games. Everything has to start from somewhere, and these games are not an exception to this rule. After all, without classics such as Pong, Donkey Kong, Pac-Man, Space Invaders, and many others, we wouldn’t have the modern games which take our breath away with every new installment.

Today, arcade games are all but gone, slowly being replaced by modern PC and console gaming. However, in some places, arcade cabinets are still going strong. And hardcore fans still gather by the dozens in hopes of proving to everyone present that they can hold the highest score in the joint.

Here at PrimeTime Amusements, we like to give proper tribute to the games that started it all. We’d like to dedicate this article to discussing the 5 best-selling electronic arcade games in the business. Please read on… 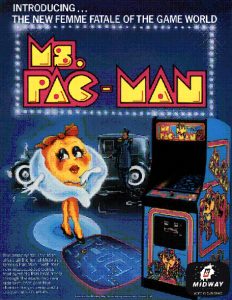 The Pac-Man series of arcade cabinets were groundbreaking in many aspects. They were among the first generation of games that pandered, to male gamers (which was thought to be the biggest target demographic at the time), but to their female rivals as well. Ms. Pac-Man was released in 1982. Its existence was in part due to the original Pac-Man’s success, later released in 1980.

Ms. Pac-Man plays similar to the classic Pac-Man we all know and love, but with several changes to the core mechanics. For instance, this time around there were 4 different mazes. They are identified with different colors: pink, teal, brown, and blue. The mazes alternate at different levels, which added an additional layer of challenge to the original’s gameplay. Three of these stages also had an extra pair of warp tunnels, as opposed to its predecessor’s single warp tunnel.

On an aesthetic level, the walls were now filled in with a solid color, instead of remaining in their traditional outline appearance. This change was made to help new players to get accustomed to the gameplay and layout of the mazes. Some sounds, animations and character names were also modified to better suit the new female protagonist.

Other important changes involve the revamping of the ghost’s behavior. The developers also changed the fruits from static objects, to items that constantly move around the stage for added challenge. 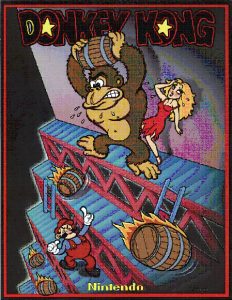 As many of you may know, this game cabinet was the birthplace of the very iconic video game characters Super Mario and Donkey Kong. This arcade game itself was released in 1981, and was Nintendo’s ultimate effort in breaking through to the American arcade market. Despite the initial doubts and refusal of Nintendo’s American branch, the game was very successful both commercially and critically in the United States.

The game itself was simple, like so many others at the time. The objective was to take control of Mario (then named Jumpman) and avoid various obstacles in order to climb to the top of each stage. Kong than proceeded to rescue the damsel in distress from the clutches of the evil ape.

The gameplay, however, was a totally different story. This game is globally recognized as one of the toughest electronic arcade games in history. It required patience and precise timing in every jump to emerge victorious. Every level consisted of four stages, each one with its unique hazards and challenges. This variety also made it one of the most complex games of its time.

The success of this cabinet was twofold. Besides being a great video game in itself, this electronic arcade game was also the first to use cutscenes and visual cues to create characterization. The creators weren’t just trying to design a game, they were also trying to tell a story; A feat that would be exclusively reserved to television and movie theatres at the time. This attempt at using a video game to convey a plot would lay the foundation for future games to come. 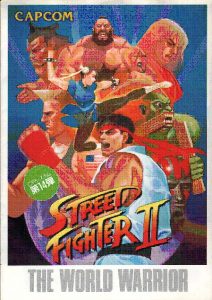 The second installment of Capcom’s renowned competitive fighting games came to arcade cabinets in 1991. This game featured many concepts of the first installment, while also adding a few extra perks to the already-formidable gameplay.

The main difference of this game was the possibility to choose from a roster of unique individuals as the player-controlled character, as opposed to being limited to just Ryu. There are a total of 12 fighters in this game; 8 of which can be used by the player, and the remaining 4 are controlled exclusively by the computer. Each of these personalities had their own fighting style, moves, and motivation to participate in the tournament matches.

Beside the different characters, this game also introduced the concept of “combos” to the core gameplay mechanics as an unintended byproduct of the development process. As players experimented with the newly-released game, they would notice that certain moves would transition smoothly into others. This concept was noted by Capcom and was made into a standard addition in their following games.

The competitive multiplayer aspect of this game was one of its most important contributions to modern gaming. The sheer popularity that this title gained singlehandedly sparked the fighting game boom of the ‘90s. This fame inspired other developers to create their own games, and skyrocketed arcade gaming’s popularity even higher. By 1995, at least 25 million individuals had played Street Fighter II in an arcade cabinet. The SNES console port of this game sold 6.3 million copies, which made it Capcom’s most commercially successful title until 2013, when it was surpassed by Resident Evil 5. 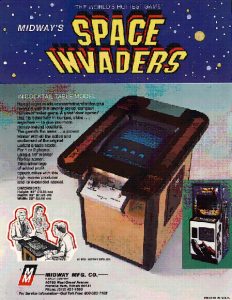 The beloved pixelated video game alien invaders first made their debut in 1978. Space Invaders was one of the first arcade shooting games, and was inspired by several popular alien movies at the time, such as The War of the Worlds and Star Wars.

The objective of this game was to take control of a mobile laser turret stationed at the bottom of the screen and shoot at rows of alien invaders to prevent them from invading the Earth. While this game is conceptually simple, its real difficulty lies in precisely hitting each target in order to survive the highest amount of waves possible. As the player destroys alien invaders, the remaining enemies speed up their movements and start frantically firing back at the player. At this time, the player must truly focus on shooting down the rest before they reach the bottom, or face a game over.

As the player defeats a wave of aliens, another one takes its place, each time with increased movement and firing speed. The player must survive and shoot as many enemies as possible in order to achieve the highest score.

Despite its simplicity, this game arrived in a time where video games were seen as a novelty, rather than a well-established entertainment industry. The success of Space Invaders helped to advance the industry into the golden age of electronic arcade games, which spanned from the early 80s, to the early 90s, where they started to get replaced by home consoles and PC games. 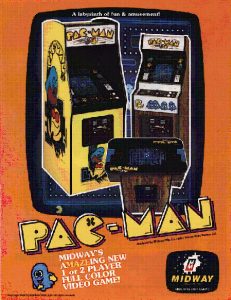 With an arcade game series this popular, it’s no wonder that Pac-Man managed to make this list twice!

The original Pac-Man was developed by Namco and first released in Japan in 1980. The game was then licensed by Midway and came to the United States in October of the same year. Pac-Man is a unique gaming phenomenon; in which its enormous popularity extends from the day it was created to current modern times. Despite being created almost 30 years ago, people still play versions of this game, either on their mobile phones, or adaptations on current-generation home consoles, such as Microsoft’s Xbox One.

This title is also one of the most financially successful coin-operated electronic arcade games of all time, having grossed approximately $2.5 billion in quarters from its release to the early 90’s. The pellet-gobbler’s immense popularity turned him into a pop-culture icon; it is part of the Smithsonian’s collection in Washington, and it is also featured on the Museum of Modern Art, in New York. Out of 100 Americans, 94 can successfully identify and name this character just by looking at his picture; that’s just how famous he is.

This game’s simple mechanics came at a time where the most successful titles were space shooters like Space Invaders, and a few sports titles which were mostly a variant of Pong. This entry revolutionized the gaming industry, and created a whole genre for itself. Currently, the character has appeared in more than 30 licensed spinoffs, and in countless illegal bootlegs which still pop up every now and then.

Here at PrimeTime Amusements our team of knowledgeable agents are fully committed to providing the best sales and rental services in the arcade gaming industry. Our company specializes in delivering arcade gaming solutions to any interested parties, in any part of the world. Among our selection of arcade cabinets you will find the timeless classics mentioned in this list, as well as hundreds of other games and machines.

For more information about our services and prices, please feel free to call us at 1.800.550.0090, or send us an email at [email protected] At PrimeTime Amusements, we’re always happy to be of service.

Is Retro the Future of Arcade?

The History of Arcade Gaming