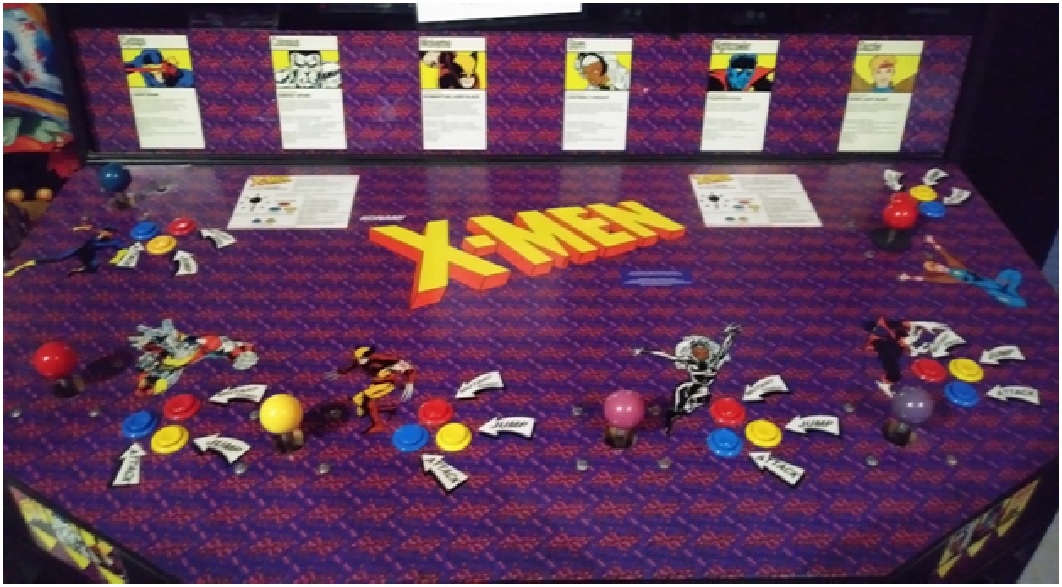 Since the success of Double Dragon in 1986, beat ‘em up games have been synonymous with the arcade industry. There’s something intriguing about beating up screenfuls of bad guys, and perpetually walking to the right that tickles our fancy in just the right way. This is especially true back in the early ‘90s, when the genre hit its peak. Today, the beat ‘em up genre has all but disappeared, Raw Thrills’ 2018 release of Teenage Mutant Ninja Turtles standing alone in a market that abandoned such games to the glory of racing and shooting games. Nevertheless, the titles that made this genre famous still shine on to this day, with some of them even receiving modern adaptations.

However, this article is about remembering the best games of our childhoods; the ones with which we grew up. Depending on when you were born, you might’ve played lots of space shooters, or maybe plenty of fighting games and DDR. However, for some of us growing up in the late ‘80s to early ‘90s, all we played back then were arcade brawlers and beat ‘em ups. This article is a homage to all of our favorite games in this genre.

Read on to learn about our picks of 5 best arcade beat ‘em up games.

We’re starting off this list with a timeless classic; a game that spawned in a legacy in the form of many other titles that tried to copy and improve upon its formula. Double Dragon was first released in 1987, back when space shooters were common, and beat ‘em ups were still relatively in diapers. Developed by Technos Japan and distributed by Taito in the West, this game was actually a spiritual successor to another similar title named Renegade. In other words, Double Dragon took many elements of its predecessor and slapped them onto another story, with new characters, and with refined mechanics. The result was a masterpiece that many gamers remember fondly to date. 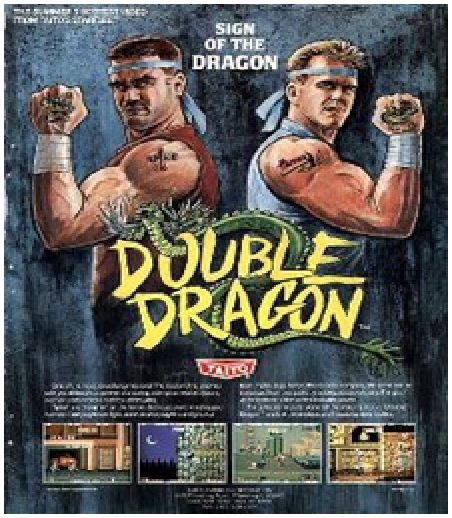 In Double Dragon, one or two players took to the streets to fight against the evil Black Warriors Gang, and rescue one of the main character’s love interest, Marian. The most interesting part about Double Dragon is that, despite being one of the first modern beat ‘em ups, it has mechanics that go beyond button mashing and spacing tactics. Specifically, the player could unleash devastating martial arts moves by using precise control inputs.

Back then, this was one of the great brawlers which, when played in 2-player mode, made for some awesome and fun experiences alongside friends and loved ones.

Released back in 1989 by Sega, Golden Axe was this company’s love letter to all the Conan-loving fans out there. In this title, players could choose from three heroes and travel across the land to rid it of the evil Death Adder, who has captured the King and his Daughter and holds them hostage in the castle. 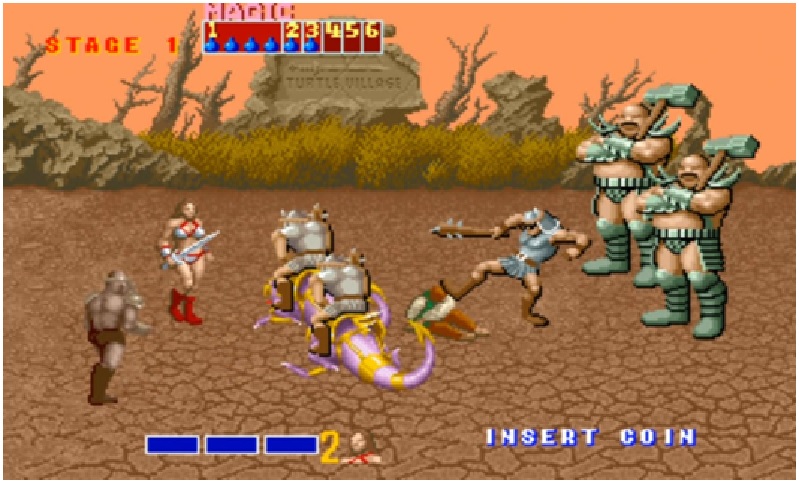 The three playable characters are essentially a homage to the toughness and gruff attitude of the heroes of the time. First, we have to stout Dwarven warrior, Gillius Thunderhead who, axe in hand, cleaves his foes apart in revenge for the death of his brother who fell at the hands of Death Adder. Next, we have none other than Ax Battler, the person who single-handedly has the most awesome name in every video game ever. Battler is armed with a massive broadsword and seeks to kill Death Adder to avenge his mother, who also died to the evil warlord’s troops. Last but not least, we have Tyris Flare, an Amazon warrior who also lost her loved ones to Death Adder.

As far as gameplay goes, Golden Axe is pretty basic. However, it also boasts some cool mechanics such as riding on mounts and casting magic. Players can knock enemies from their mounts and hop on to gain faster movement as well as several extra attacks. Each character can use special magic when their power gauge reaches certain thresholds. The power of the said spell is determined by the amount of magic that the player has accrued, with the potential to unleash screen-wiping, awesome magic.

Another timeless classic, this time wrought by the hands of Capcom. Released in 1989, Final Fight was very famous for being born as a sequel to Street Fighter and then changing genres halfway through the development. In this game, players can also choose between three main characters to travel through the streets of Metro City to rid it of the Mad Gear gang, who has taken the mayor’s daughter captive. 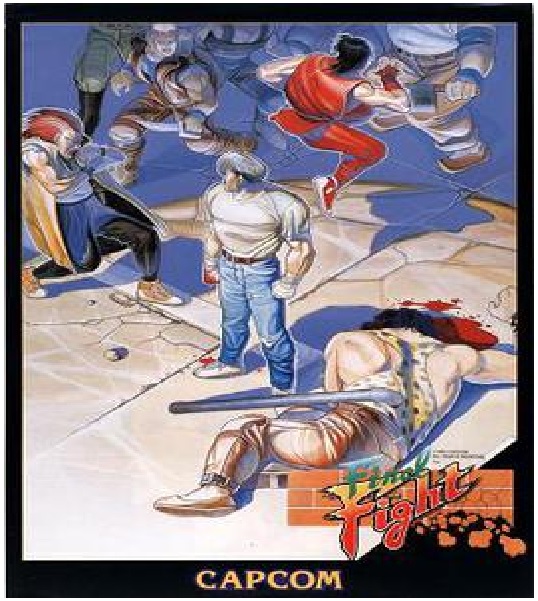 In some ways, Final Fight is like Double Dragon on steroids – you have bigger enemies to fight, smoother play, more detailed levels, more weapons that are dropped on the ground, and so on. It is further bolstered by the existence of additional secrets, such as the infinite combo glitch, Guy’s “Off-The-Wall” jump attack, hidden treasures and other scoring features that bring more depth to a game that at first glance seems more basic.

Final Fight has spawned an important legacy when it comes to beat ‘em ups. This fact is further demonstrated when considering the large number of sequels, ports, and adaptations that the game has received over time. Nevertheless, the original arcade version was one of the most popular machines in any FEC, famous for relinquishing many a player of all their quarters back then.

The game was originally created for 1-2 players, but recently fans have been working on a modified version of the game that supports up to 3.

This game is the living proof of what happens when a company has a great idea, and an even better execution of the said idea. 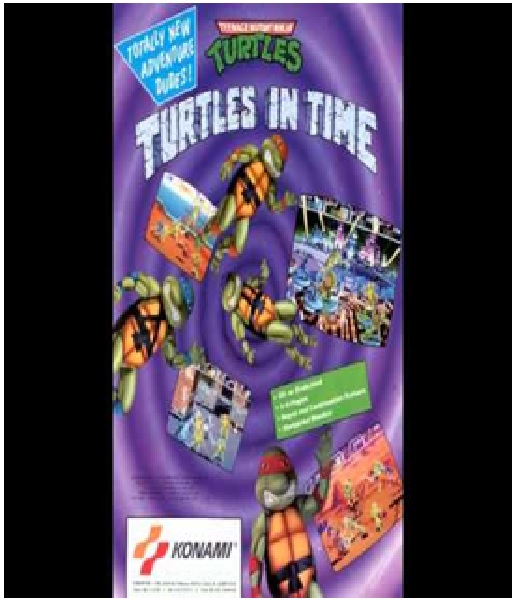 Back in the ‘90s, the Ninja Turtles were incredibly famous, spanning movies, TV shows, kids’ toys, and many, many other industries. In this sense, a TMNT video game didn’t seem so farfetched. However, while Turtles in Time was by no means the first installment in this franchise’s foray into the gaming industry, it was definitely one of the most popular titles.

With a combination of stellar graphics, smooth animation, rockin’ music, and a killer plot, Turtles in Time seemingly had it all. It also featured team attacks, allowing you and a friend to combine an attack together for a unique strike (something that was also used in The Simpsons).

In this game, players could choose from any of the 4 beloved turtles, and battle through the forces of the Foot Clan to stop the evil Shredder, who has stolen the Statue of Liberty. While this plot is quite a cliche, even for the time, what’s most interesting about the game is the setting. As its name implies, Turtles in Time will have you traveling through space and time, visiting certain important points in history and battling the Foot Clan in every turn.

Our favorite mutants have always occupied an important part in the video game industry. They have appeared in many games of many genres, most predominantly fighting games, brawlers, beat ‘em ups, and a few RPGs here and there. However, the 1992 classic X-Men game, produced and released by Konami, was an instant classic as soon as it hit the arcades. 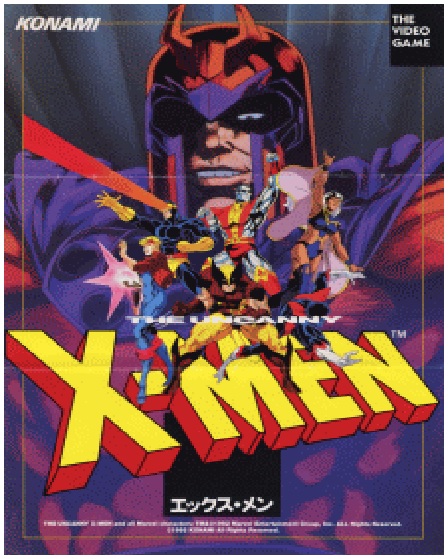 These X-Men games, while relatively simple in terms of gameplay, are most famous due to the varied character rosters. Players can choose between many mutants and use them to battle throughout the game’s many stages. In the case of the 1992 game, players could choose from 6 of the most famous mutants, including Cyclops, Wolverine, Storm, Colossus, Nightcrawler, and Dazzlers. The player must then use their selected champion to travel around the world fighting the forces of the evil Magneto and rescuing the kidnapped Professor X and Kitty Pryde.

The most striking example of this game was the production of a Deluxe dual screen model. While most arcades would grab the standard 4-player version (that would come in the same kind of cabinet as Turtles In Time and The Simpsons), the Deluxe model was a total beast of a game – it featured two CRT monitors that using a half-silvered mirror, presented an ultra-widescreen display. This technique had been used in games like Darius and Warrior Blade, but it meant that the cabinet would be enormous for what you would normally find in a ‘90s arcade. This also allowed Konami to expand the number of simultaneous players from 4 up to 6 at once.

Like Final Fight, the 1992 X-Men also received critical acclaim as well as several ports to other platforms, including Xbox Live Arcade, and PlayStation Network.