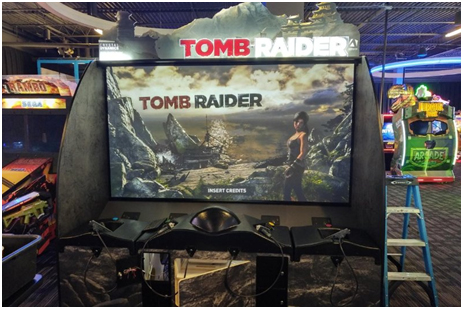 We’ve talked about Adrenaline Amusement’s Tomb Raider arcade game on several occasions this year. The cabinet, which was released at the beginning of 2018, received a massive launch; and by massive, we’re not talking only about the reception. The cabinet itself is enormous—about 120” across. While this game is ideal for Family Entertainment Centers who have enough real estate (and money) to accommodate this beast of a cabinet, this is not the case for collectors who also happen to be die-hard fans of the game series.

However, for those who tried out the game at your local FEC, and felt that they needed to get their hands on their very own Tomb Raider cabinet, today might be your lucky day.

Adrenaline Amusements announced that the company would be producing smaller cabinets for those with a smaller budget and tighter space requirements. This means both smaller operators and potential collectors. The new cabinet preserves all the functions of the original, including 4-player co-op mode, as well as guns with motion sensors and force-feedback capabilities, and will only measure 65”. This means that, while players might need to squeeze a bit when playing the 4-player mode, the cabinet itself will be a much better fit in those tight spaces.

The cabinet also has a unique design for the minimized version, which features vertical fire columns that extend from the very top to the bottom, and which light up as the gameplay progresses, as we could observe from the trailer released by Adrenaline Amusements. The marquee is unchanged, and feature the same Lara Croft picture alongside the title of the game, with the ruins of the setting where the game takes place in the background.

As we mentioned on previous occasions, this game is based on the 2013 reboot of the series, which was developed by Crystal Dynamics. Adrenaline Amusements seized the opportunity to develop this game just in time for the release of the film reboot, and to both increase interest in the movie, and to rally the fans of the series with an arcade adaptation of the game that, on other platforms, garnered overwhelmingly positive feedback from both fans and critics. Nowadays, the game series is on its third installment, with Shadow of the Tomb Raider released earlier this year in September to mixed reviews.

Nevertheless, for fans of the series, we hope that its continued success further inspires other companies to keep releasing excellent arcade adaptations like this one.