We’ve been constantly writing about the ongoing happenings and developments of the arcade and gaming industries, focusing mostly on new releases and other important news regarding arcade games and their developers. However, today we’ve come to talk not about a big group that’s making or publishing new title nor amusement but rather about how you, dear readers, can actually get to create your own concepts and pitch them, with a chance of being selected to develop them into full-fledged arcade games.

We’re talking about the #NoticeMe Game Jam, and the Arcade Jam contests, which are going down throughout March and April. In each event, solo devs or dev teams can sign up to submit their own prototypes of arcade redemption games, with great prizes going to the ones who develop the best pieces of software. Though the rules and prizes vary per contest, they both open the doors to the winners so that they can potentially develop their concepts into full games, and feature them in their very own cabinets, ready for distribution and sale at some point down the line.

As we mentioned just now, while the prizes are different in each contest, they both have offerings that go beyond the potential development of concepts into full games, and also include a variety of other benefits:

The Arcade Jam, most notably, offers the least prizes in terms of monetary value, but with Sega Amusement International as the host, the winners will get to meet with the head of R&D, as well as the Japanese development team of the company. And this is without mentioning that, should they actually develop the winning concept into a full arcade or redemption game, the winners will probably have access to SEGA’s vast distribution network to get their game out there. On top of that, the winners and runner-ups will also get a variety of extra rewards and goodies from the other contest sponsors, including gift vouchers, apparel items, gaming accessories, and more.

On the other hand, the #NoticeMe Game Jam offers much more in terms of monetary value to the winners and runner-ups, with a cash prize of over $33,000 USD shared between the first 5 places, as well as among several other honorable mentions. Furthermore, the top ten games in the contest will have a chance to be ported into its own cabinet and played by thousands of gamers across the world. However, while the games here will be judged by members of the sponsor companies (GameMaker and Opera GX), the winners of this contest are chosen by popular vote. Finally, the top ten games will be announced by PewDiePie on his YouTube channel on April 11th. 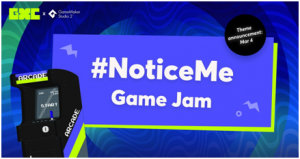 It’s worth pointing out that, while the #NoticeMe Game Jam is open to all participants around the world, the Arcade Jam has certain restrictions, including maximum team sizes of five members, and with all the participants having to reside in the UK. Moreover, while the UK-based contest doesn’t mention any restrictions as far as the development goes, the Game Jam requires that the teams develop their prototypes exclusively on GameMaker Studio 2.

If you’re interested in learning more, or are thinking of participating yourself, you can check out the contests’ respective websites, which we’ll link down below for your convenience: