We’re always on top of the latest happenings in the arcade, amusements, and video game industries, including new titles, updates, and consoles. While this is all fine and “business as usual,” we sometimes run into some announcements that are so impressive, that we can’t help but stare in disbelief. In this case, we’re talking about AtGames’ Legends Ultimate Home Arcade, the company’s self-proclaimed “Connected Arcade.” Considering how this beautiful behemoth is built, we’re very inclined to believe these claims.

Now, AtGames is a company with a considerable trajectory in the video game industry. Their creations include retail products, digitally-distributed titles, as well as important streaming services and technology. In other words, they’ve been around the block, and are always working on new and innovative products and services. Some of their most important creations include the “Blast!” a plug-and-play console featuring titles from some of the classic consoles including old arcade games, as well as Atari & Sega titles. They are also the creators of Direct2Drive, a digital distribution platform where you can purchase games and download them straight to your PC; much like Steam, GOG, or Epic Game Store.

However, one of the latest creations, which was showcased in this CES 2020, is the “Legends Ultimate,” a fully-connected and expandable arcade cabinet that, like the Blast! offers a wide variety of arcade titles across multiple generations. The difference here would be that, instead of offering many games through a console that’s hooked to your TV, this is an actual arcade cabinet, equipped with many different types of controls and input methods, and with a library of 350 classic arcade games. 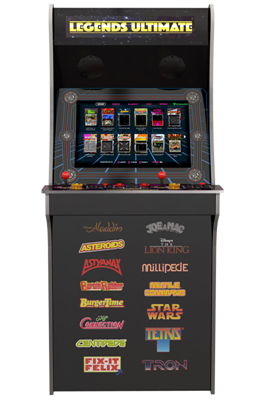 However, not content with offering only arcade titles, this beauty lives up to the name “ The Connected” by also featuring popular console classics such as Joe & Mac, Judge Dredd 95, Nightshade, and the wide slew of Realsports games, among many, many others.

The Legends Ultimate is equipped with several AtGames proprietary technologies to provide the best gaming experience with nearly no downtime, downloads, nor additional setup required other than plugging the machine into the outlet. For instance, the developers created ArcadeNet, a technology designed exclusively for this machine, which allows owners to download additional games to expand its library. Since this tech is designed around dedicated servers, there isn’t even any lengthy download time required, as you can simply choose your desired title from a list and instantly start playing.

One of the strongest features, however, has to be the BYOG (Bring Your Own Game). Through the free AtGames app, users can stream their favorite games from any PC-based digital platform like Steam, Uplay, or Epic Games Store, among others, to the Legends Ultimate through your internal network. Additionally, for a small hourly fee, anyone can also “rent” these digital PC games from the company’s dedicated and stream them from their servers. 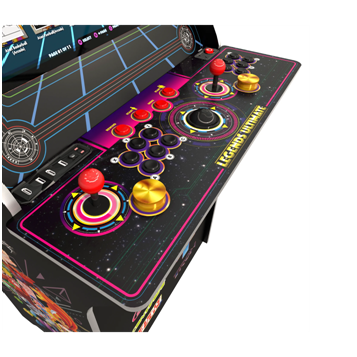 Despite supporting many different games, there’s one very important factor we haven’t talked about yet: the Controls.

You’d think that with these many different games, across many different platforms, finding control schemes to accommodate all of them could be problematic. However, the Legends Ultimate solves this issue by providing several types of controls, including many arcade buttons, joysticks, and even a trackball and a pair of spinners. And for the modern games that can be streamed from other platforms, you can easily control them by plugging in an Xbox or PS4 controller via one of the USB ports.

The Legends Ultimate Home Arcade goes for only $599.99 from AtGames’ website or Walmart. However, you have to be lucky to score one of these babies, as preorders are already sold out on both platforms. We don’t know if they’re going to open another round of orders, but you better keep an eye out if you want to snag one of these beauties!