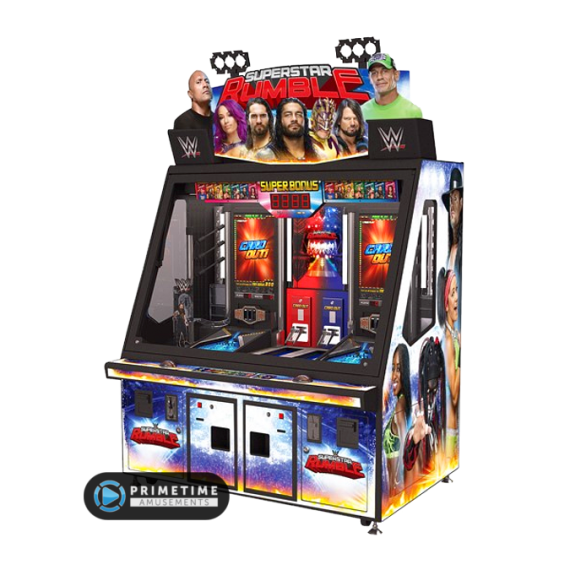 Are you ready for the ultimate redemption experience? WWE Superstar Rumble by Andamiro USA is here to give game rooms around the world a massive lift!

This officially licensed arcade redemption game has been designed to capture every bit of excitement that the high-octane world of the WWE offers. Players fire steel balls at a moving target resembling the iconic WWE championship belt. A successful hit moves the player up the ladder, while a miss redirects the ball onto a maze-like playfield, clad with pegs, where tickets are won. Your goal is to reach the top of the ladder to win collectible cards. Drain balls five times in the center hole of the pegged playfield to enable multi-ball action, almost like a pinball machine!

Each unit comes with two player stations in one package, similar to Andamiro’s popular Despicable Me Jelly Lab.  Each player station features a video display of their own, running game-related animation and real wrestling footage both during gameplay and attract modes. There are eight collectible cards players can win from the machine that can also be exchanged for tickets, if they so desire.

Check this game out as seen at the IAAPA 2018 trade show! Video available in ultra-sharp 4K UHD.

– Likenesses of John Cena, The Rock, Sasha Banks, The Undertaker and more are found on the machine 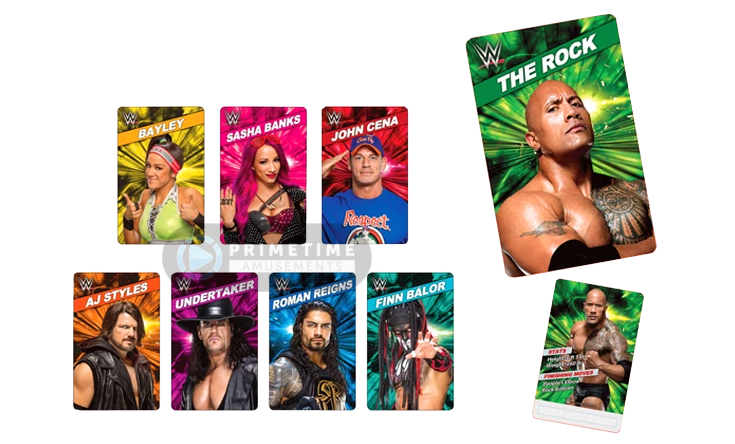 – Two players supported by each cabinet

– Win tickets or collectible cards starring eight of the hottest wrestlers (pictured right). Keep the cards or exchange them for tickets!

– Aim and fire metal balls at the WWE Championship belt, climb the ladder to win the cards

– Missed balls are turned into tickets