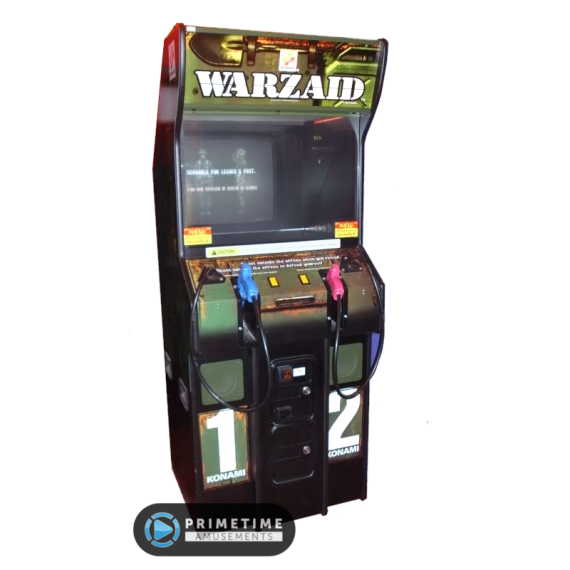 Borrowing certain gameplay mechanics from other arcade hits like Time Crisis, you play as a soldier on a mission to save the world from an army of the skeletal undead. These aren’t ordinary monsters however – enemies are just as armed to the teeth as you are! Pointing off-screen allows you to both reload and take cover behind a bullet proof blast shield; not all incoming shots you see on screen will hurt you but watch out for glowing fireballs as those will! Obtain additional weapons such as a rocket launcher, play for a high rank and save the world!

– Exclusive to arcades with no home console or mobile port to compete with.

– 1-2 or 1-4 player (depending on the cabinet style) game play; play for the highest rank and win an extra life!

– Multiple missions to choose from

– Take cover behind your shield by pointing off screen; collect additional weapons to change the tide of the fight

– Powered by the Konami Viper hardware

– Konami’s Warzaid is no longer produced, having been released in 2002. Please call us about availability. All used models pass through PrimeTime Amusement’s “Certified Pre-Owned” program, which guarantees that the game will be completely refurbished and ready to operate upon arrival.