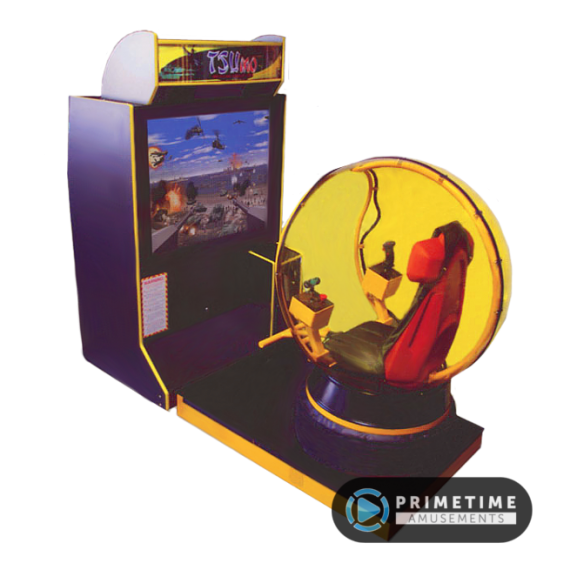 The library of games developed for the TsuMo systems involved both interactive video games and passive motion rides. New content was made available after the initial release that could be permanently uploaded onto the TsuMo computer via CD-ROM upgrades. Player-selectable multi-game menu puts control into the hands of the player. Rides/Games included:

– Air Raid: Take the hot seat inside of an anti-aircraft turret on a Navy destroyer, blasting enemy planes out of the sky.

– BeachHead 2000: Jump into a turret at the frontline of a beach where enemy invaders must be stopped

– Crimson Skies: Take control of a 1937 fighter plane set in an alternate universe where zepplins patrol the skies. This is a port of the PC/Xbox game of the same name.

– Ex Zeus: Become a flying robot in the battle to save humanity from an alien invasion.

– MechWarrior 4: Vengeance : Guide your mechanized war machine (better known as a “mech”) around the battlefield, bringing massive firepower to bear as you complete a variety of missions. This game can be linked up to eight cabinets for team play or deathmatch style free-for-all machines.

–  Rollercoaster rides of America: Sit back and enjoy as the machine recreates the exact motion and feel of three different roller coasters.

NOTE: With the TsuMo no longer being produced, we cannot guarantee which games might be installed on used units nor can we obtain new software upgrades.

What Else Makes The TsuMo Interesting?

– Ask about conversion to a modern LCD display!

– Tsunami’s TsuMo Multi-Game System is no longer in production, having been released in 2001. Please call us about availability. All used models pass through PrimeTime Amusement’s “Certified Pre-Owned” program, which guarantees that the game will be completely refurbished and ready to operate upon arrival. Also ask about our game rentals!