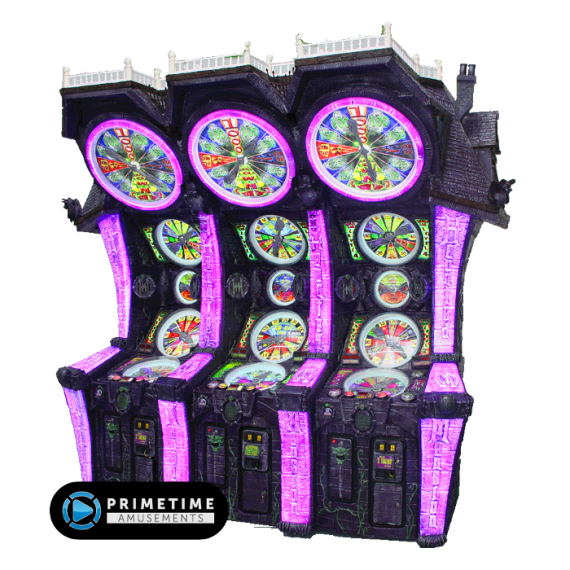 The Haunted Mansion / Hotel Adventure collection is the first of its kind in the amusement redemption industry. Designed to appear like a classic “haunted house” or mansion, the exterior uses fiberglass molded that were first hand sculpted by professional designers. It features dozens of bolt-on casted pieces which were all hand sculpted as well – including bats with LED eyes, a ticket door goblin, and other small details that give it character that other games lack.

Apart from the stunning appearance, Haunted Mansion is a spinner base skill game consisting of five different play levels. The player begins in the “Dungeon” and by landing in the either the “GO-UP ZONES” or SECRET PASSAGES the player can move about the house, the manor, or the hotel. There are also booby traps in the higher levels which will take a player back to a previous level if they aren’t careful!

Functionally, each Haunted Mansion unit offer plug-n-play set-up in the back. All the spinner brackets are identical and use a system of dip switch settings to assign them a certain level. Servicing the machine is a breeze. It also offers programming options which are detailed in the manual. There is a small controller on the inside of the game which an operator can use to adjust game settings, run diagonstics, bookkeeping stats and more.

Documentation does refer to this game by the names Haunted Mansion, Haunted Manor, Haunted Hotel and Haunted House. The Haunted Mansion was designed in 1, 2 and 3 unit models. Please specify which one you are interested in at the time of your order!

– Unique looking piece with a striking haunted manor theme to it

– The look is further enhanced with backlit fixture lighting, highlighting each wheel

– Fiberglass pieces were hand-crafted and cover the entire unit

Want to see the Haunted Mansion in person? You can find it at the PrimeTime Arcade inside the X-Treme Action Park in Ft. Lauderdale, FL!

Check out the Haunted Mansion in action: