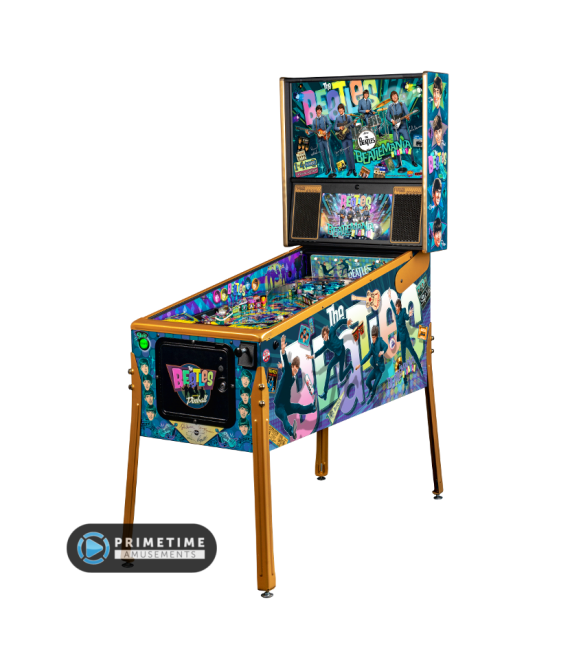 As the most influential band in music history, The Beatles is a property that people old and young can instantly recognize. To celebrate such an incredible legacy, Stern Pinball has created the first and only Beatles-themed pinball machine: The Beatles – Beatlemania.

Based upon a classic 1980 Stern pinball table called Seawitch, that older table has been completely re-themed to focus on The Beatles when they began their international “British Invasion” in 1964. The likenesses of John Lennon, Paul McCartney, George Harrison and Ringo Starr (the “Fab Four”) from this era are found on the cabinet, sporting their iconic blue suits. As the game layout is essentially the same as a classic game, this title feels like it came from the 1960’s, playing as a simple game that people of any skillset can enjoy.

The Beatles does more than just re-themes an old game with new artwork however. All of the electronics are modern, with Stern’s SPIKE-2 system managing the components; lights replaced with long-lasting LEDs; a sharp HD display built into the back box for vibrant animations and remastered clips and more. Custom speech has been provided for the game by the legendary disc jockey Cousin Brucie, who introduced The Beatles at New York’s Shea Stadium in 1964. The playfield has two new feature additions that elevate the game beyond Seawitch – first, a magnet at the top of the playfield; second, a spinning disc in the center of the playfield that looks like a vinyl record.

Check out the Candy Crane House as seen at IAAPA 2018! Video available in 4K UHD; subscribe to us on YouTube to stay up-to-date with the latest product videos!

NOTE: While Stern has produced 100 Diamond Edition and 250 Platinum Edition units, these are extremely difficult to get a hold of due to high demand. The only differences between these units and the Gold Edition is: 1) unique artwork that other models don’t have 2) extremely limited production numbers as stated. Please call us about price & availability. Click here to download/view The Beatles Pinball Features Matrix (PDF).

– The first and only licensed pinball table based upon The Beatles

– Limited production! Only 1,614 Gold Edition models will be made.

– Retro style gameplay that fits with the 1960’s aesthetic

– Features nine Beatles hits: A Hard Day’s Night, Can’t Buy Me Love, Ticket to Ride, All My Loving, Help, Drive My Car, It Won’t Be Long, I Should Have Known Better, & Taxman

– Special features: Magnet and disc spinner, the latter designed to look like a vinyl record