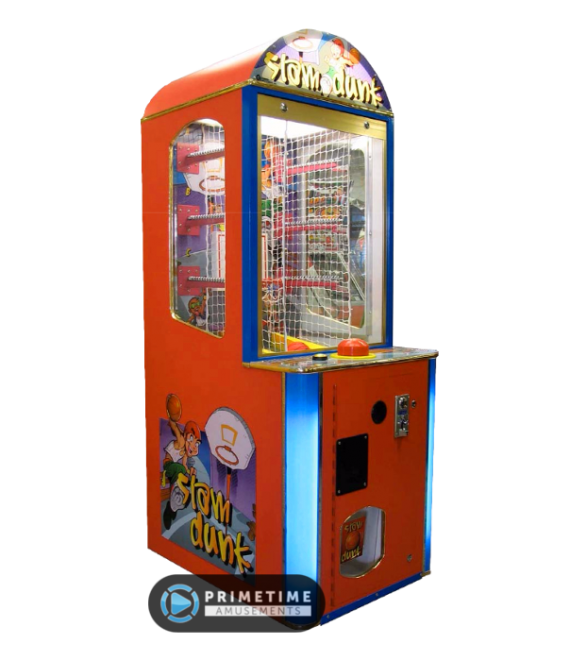 This merchandiser brings in energy from the court into your arcade – it’s Slam Dunk by Coastal Amusements!

Built as a self dispensing skill prize game, your goal to win the prizes inside is simple  – shoot baskets to win! After coining up, users will hear the game proclaim “PLAY SLAM DUNK!” followed by a voice telling them to selected a desired prize. This is accomplished via pushing the Prize Select button, which will toggle between the different prizes available. Inside of the game and attached to the back is a basketball hoop that will move higher up the playfield as the game progresses. As the difficulty increases, so do the points as the hoop passes the 3-point line. If a prize is won, the spiral turns and drops the prize below.

Designed with the street operator in mind, the sophistication of the software allows for longer intervals between restocking visits. This is accomplished by automatically avoiding empty prize spirals, dispensing an alternate prize in the event that a spiral that has just been emptied be mistakenly selected. It also will alert attendants with voice prompt and allow no further play if all prize spindles are empty. The software also contains provisions that provide “at a glance” troubleshooting assistance through code numbers that flash in the displays. The self-contained nature of the game greatly reduces component loss issues, and lessens maintenance time.

– Fully sculpted basketball hoop will rise as the game progresses

– Coastal’s Slam Dunk is no longer in production. Please call us about availability. All used models pass through PrimeTime Amusement’s “Certified Pre-Owned” program, which guarantees that the game will be completely refurbished and ready to operate upon arrival. Also ask about our game rentals!