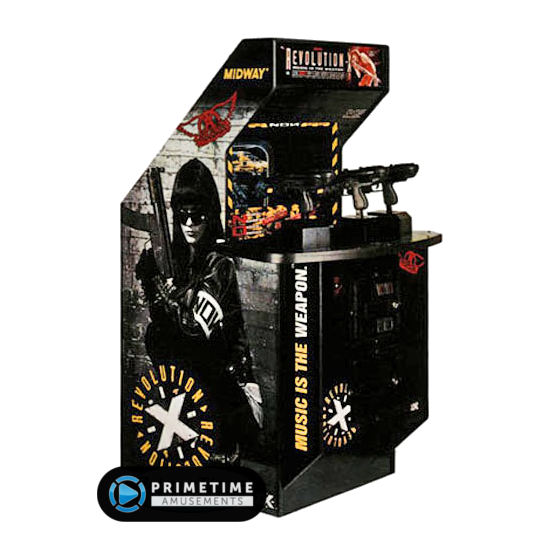 As the story goes, the famous rock band Aerosmith has been kidnapped by the New Order Nation (NON), an organization whose goal is to enslave all of the world’s youth population by suppressing all forms of entertainment. That of course includes music. As one of few remaining free youth, you are equipped with a machine gun and the strongest weapon available: music, to free all of the youth (and Aerosmith, too!) and put an end to the NON menace once and for all.

Revolution X features Aerosmith’s biggest hits up to the time including “Eat the Rich”, “Sweet Emotion”, “Toys in the Attic” and “Walk This Way”. It also includes original speech and digitized original video of the band made exclusively for Revolution X. Battle your way through intense environments filled with astonishing boss monsters, secret weapons, hidden passages and more using 1-3 mounted guns!

– Not available on on modern home console

– Starring Aerosmith, including some of their popular songs along with original speech made for the game

– Digitized graphics and sound makes for a unique looking game

– Players can select where they will play next as they travel to different scenes around the world.

– Midway’s Revolution X is no longer produced, having been released in 1994. Please call us about availability. All used models pass through PrimeTime Amusement’s “Certified Pre-Owned” program, which guarantees that the game will be completely refurbished and ready to operate upon arrival.