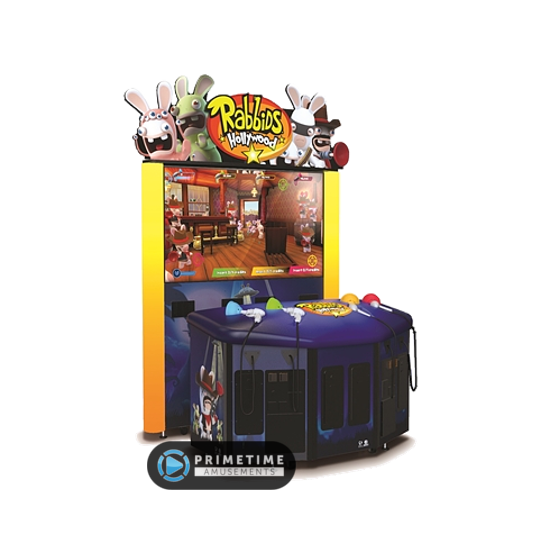 You might know The Rabbids by Ubisoft. Introduced in the popular Rayman series of games, they have gone on to sell over 14 million video games and have starred in more than 230 TV episodes over a variety of series. Now they are taking over the silver screen arena with Rabbids Hollywood by Adrenaline Amusements. Now available in a smaller 65″ model!

This re-designed Rabbids Hollywood arcade experience has been made to allow more locations to place one on location. It offers the same family-friendly fun, just in a smaller package.  This still supports 1-4 players at the same time, while most light-gun style arcade games support a maximum of two. Four player matches makes for more exciting games, and higher earnings as it fosters friendly competition as players see who can nab the highest score!

For the game itself, it has been designed to appeal to customers of all ages. The guns feature a plunger instead of a barrel, the position on the screen managed via internal motion sensors. There is no blood or gore to worry about or shut off. Just blast the goofy Rabbids as you are directed on one of three movie sets: Wild West, Zombie and Sci-Fi. Each “set” features three levels to play through, providing for great replay value and consistent fun! Grab power-ups to gain a temporary advantage and see who out of your friends reigns the leaderboard at the end of each act.

Check out the Deluxe version as seen at IAAPA 2017. Check it out in 4K UHD! Stay tuned for footage of the 65″ version, coming soon!

– Exclusive to arcades, fully licensed and created in partnership with Ubisoft

– Supports 1-4 players at the same time!

– Family-friendly content that is easy to pick up and play

– Easy-to-use guns only require one hand to operate, featuring a single trigger and no reloading required