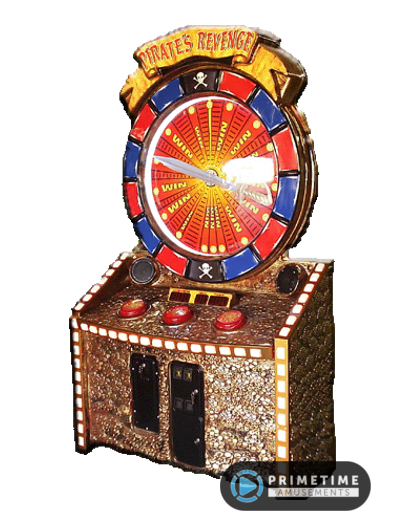 It’s the game that started a revolution in redemption arcade gaming with an innovative idea – it’s Pirate’s Revenge by 5 Star Redemption.

The game uses 5 star Redemption’s distinctive cabinet design, sporting 3D molded art all over the machine as opposed to typical 2D drawn artwork. To play the game is simple, making it fun for players of all abilities. Using the giant buttons, the player aims to skillfully stop the giant spinning pirate sword on the best ticket goal area possible. Also created was an optional 7 button game allows the player to push the “Two times Button” and skillfully try to double their tickets. In that version, the player must choose a red or blue color and attempt to stop on selected color or win “Two times” tickets.

– 3D molded artwork on the cabinet

– Shipped with a standard coin door

– 5 Star Redemption’s Pirate’s Revenge is no longer in production. Please call us about availability. All used models pass through PrimeTime Amusement’s “Certified Pre-Owned” program, which guarantees that the game will be completely refurbished and ready to operate upon arrival. Also ask about our game rentals!