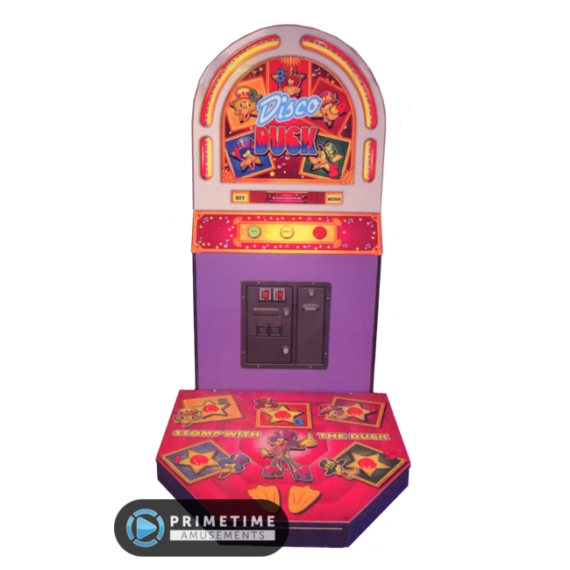 While kids these days won’t understand what the Discos of the 1970s were all about, that doesn’t stop them from having fun with Disco Duck by Coastal Amusements!

Disco Duck is essentially a kids dancing game, where the platform in front of the unit features five buttons that kids stomp on when lit. If you can step on them when they are lit, you get points which are converted into tickets. Different patterns are built into the game, which also allows for different difficulty levels. Operators can also adjust ticket payouts to fit with the needs of their location.

– A dance/stomp experience that is custom made for kids

– Step on the lit buttons to win points, which become tickets. Features a Non-Slip dance floor!

– Player hits & misses are tracked by the red numerical LEDs

– Fun music plays during each dance

– Ships with a ticket dispenser and standard 2-slot coin door

– Coastal Amusements’ Disco Duck is no longer in production. Please call us about availability. All used models pass through PrimeTime Amusement’s “Certified Pre-Owned” program, which guarantees that the game will be completely refurbished and ready to operate upon arrival. Also ask about our game rentals!

Check out Disco Duck in action: