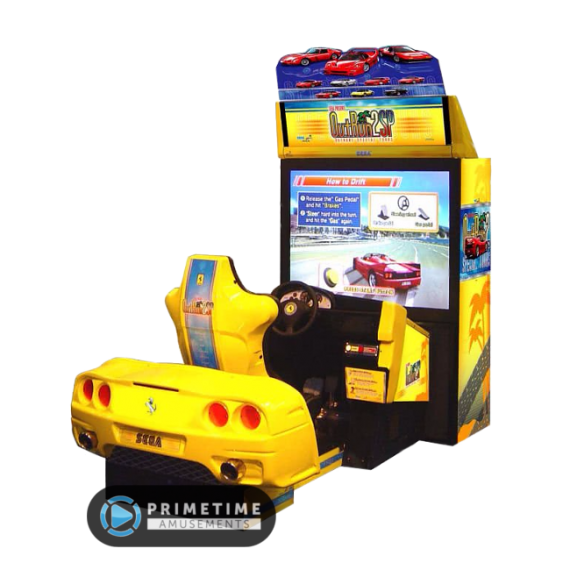 OutRun 2 SP (the SP standing for ‘Special Tours’) is a virtual sports car driving experience, upgrading the exhilaration of the classic OutRun 2 game series with 15 new courses, 2 new Ferrari vehicles, new music, gameplay tweaks and more to make it the ultimate edition of the game.

You jump behind the wheel of a super-charged Ferrari with your skills challenged by the twists and turns of cleverly designed courses. the fifteen new courses were designed after the “highways and byways of the US”, allowing players to drive through familiar terrain while bringing the total course count to 30! The vehicle selection is now up to 10, pulling from the world-class brand of Ferrari. With these improvements and sharp 3D graphics, OutRun 2 SP is a game that will continue to earn for many years to come.

– Officially licensed! Get behind the wheel of a Ferrari, without the luxury cost

– Deluxe model originally shipped with a 50″ projection screen; ask about upgrading to a modern LCD display!

– Link up to four (4) units for a multiplayer Ferrari battle!

– Sega’s Outrun 2 SP is no longer in production, having been released in 2004. Please call us about availability. All used models pass through PrimeTime Amusement’s “Certified Pre-Owned” program, which guarantees that the game will be completely refurbished and ready to operate upon arrival. Also ask about our game rentals!