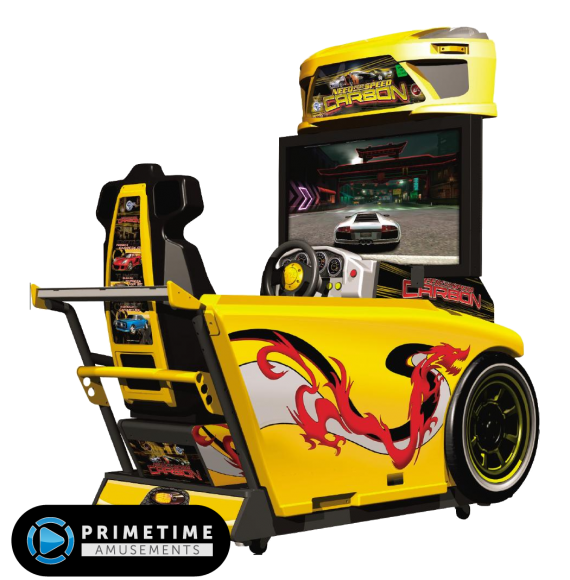 Need for Speed Carbon was GLOBAL VR’s final arcade installment in the Need for Speed series. It was converted from the home version of the same name and fine-tuned for the needs of the arcade market.

It features Tuners, Exotics, and American Muscle cars competing on urban streets. New drift tracks and drifting physics makes for more exciting races than before. Players will drive to build their reputation, earning prestige along the way while driving on some of the most exciting tracks ever!

REFURBISHED STOCK: 6/17/21! – A Need For Speed Carbon Deluxe unit is currently available from a PrimeTime operated location in Florida. Each will go through our Certified Pre-Owned refurbishing program before shipping to you. Please call for pricing and lead time.

– Console-to-arcade port of the popular Need For Speed series

– Deluxe model features a 42″ LCD monitor, molded side panel and racing car flaps on the back

– Powered by a PC with an nVidia 9600 series graphics card

– Link up to 8 units for multiplayer fun

– GlobalVR’s Need For Speed Carbon is no longer produced, having been released in 2008. Please call us about availability. All used models pass through PrimeTime Amusement’s “Certified Pre-Owned” program, which guarantees that the game will be completely refurbished and ready to operate upon arrival.