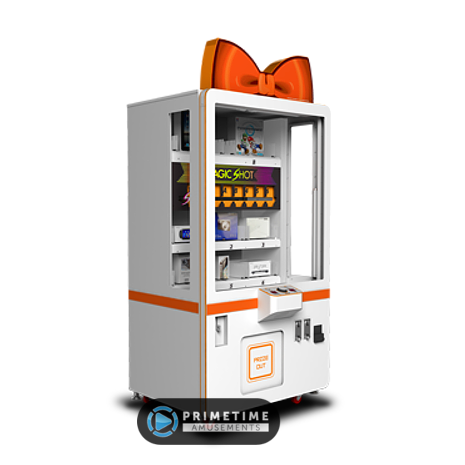 Similar in design to Andamiro’s popular i-Cube game merchandiser machines, the Magic Shot offers the same kind of fun, now based 100% on the user’s skill!

Each Magic Shot features eight prize bays, each assigned a number or a letter. Letters are assigned to the two top bins, which are larger and generally meant for the most valuable prizes. To play, customers first take note of which prize they wish to win and it’s number/letter. Insert credits then aim for the corresponding numbered hole by pushing and holding the game button down. The stylized “S” arm will move to the right as long as the button is depressed. Once it looks like the “S” is precisely over the desired target cutout, let go and see what happens.  If the “S” successfully passes through the hole, players wins that prize! If not – try again!

– Instant prize merchandiser that is based on user skill

– Single button control makes it perfect for all ages

– Digital music plays occasionally during attract mode and during gameplay