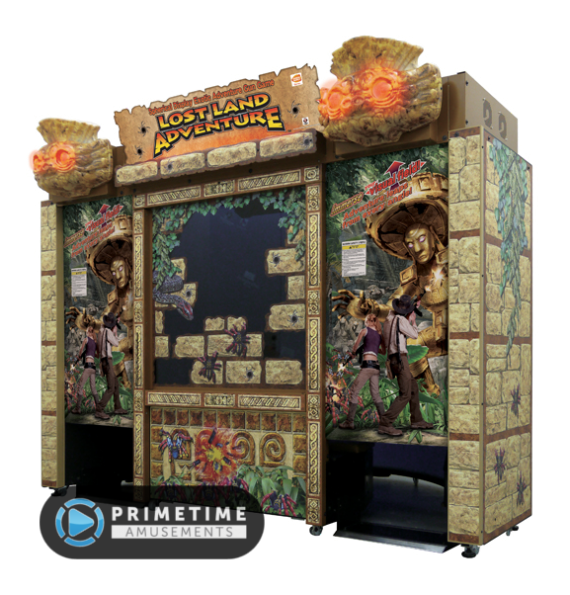 Lost Land Adventure stands out among light-gun games not only due to its size but mainly thank to its screen. Using a large dome screen, 1-2 players sit inside of the enclosed video arcade theater cabinet, exploring ruins, blasting enemies and collecting treasure along the way.

Players join the experienced treasure hunter”Jack” on an expedition into remote locations throughout the world in search of hidden treasures. The treasures located on the map will not be easy to retrieve as many obstacles and creatures stand in the way. Players will have to use their quick reflexes to blast away at enemies shown on a huge 180° degree seamless Curved Projection Monitor.

Adventurers will also have to solve puzzles in the game to advance! With four selectable stages, choose your own adventures and save your game progress with the included PIN System. When you complete all four stages, the game unlocks an additional, challenging fifth stage to play.  Depending on how well you play and what treasures to collect, you will be treated to different endings! Includes a ticket dispenser for optional ticket redemption play.

– Software is exclusive to arcades
– Features a large and unique 180° seamless dome screen
– Each player controls the action with a force feedback machine gun
– Five (5) total stages to explore with puzzles to change things up from your standard light-gun shooter
– Co-operative team based play
– PIN system & keypad for saving your progress as you treasure hunt
– Colorful 3D graphics running at 60 frames a second
– Enclosed “theater cabinet” blocks out sound from the surrounding environment
– Optional ticket redemption with built-in ticket dispenser
– Ships with a standard 2-slot coin door; card swipe ready