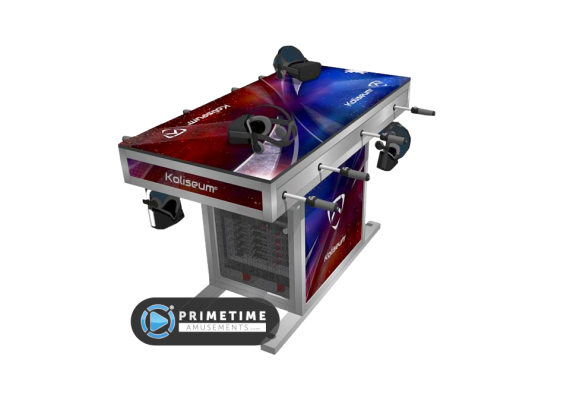 Are you ready for a unique and social multiplayer VR arcade experience? If so, then check out the Koliseum Soccer VR table by Kynoa and Barron Games International.

This table takes foosball/table soccer to a completely new level by blending the virtual and the physical into one. The cabinet itself is shaped exactly like a foosball table, with a flat surface on top and four control rods on each side (one pair is the Attacker, the other pair is the Defender). One to four players don the Oculus Rift S headset, then enter into the world of the “Koliseum.”

Thanks to this additional dimension, the Koliseum is far more versatile than any other foosball table on the market. After placing the headset and calibrating the headset position, players choose from one of 33 teams (not representing any particular franchise, just a country), pick a jersey, then pick a stadium to play in (note to operators: Stadiums can only be selected using the Defender position rods; this can be skipped if you want).

In play, the game also works a little differently than traditional mechanical foosball. There are fewer rods & playfield men than a typical foosball match; the physics are a bit more exaggerated and you can obtain power-ups! The power-ups include a Shield (puts up a temporary barrier around your goal), a Spring (for an extra bouncy ball), a Multi-Ball event and the Death Ball which temporarily kills the players that it touches.

Check out the Koliseum Foosball VR as shown at IAAPA Expo 2019. Video available in 4K UHD; subscribe to us on YouTube to stay up-to-date with the latest product videos!

If you have any player station not use the VR headset, that spot is represented by an Artificial Intelligence, where the computer will control players for those rods. Any player that is using the headset is represented in-game by a human-like player avatar. Whether alone or with a group, players are in for a treat that stands out in any arcade!

Note: It is recommended that this unit have an attendant to oversee headset cleaning, play usage and game setup.

– Multiple nation teams and stadiums to choose from; enhanced gameplay with power-ups

– Realistic foosball rod controls, with two for each player (an Attacker and Defender position) for a total of eight

– Choose from a number of international (generic) teams, jerseys and stadiums.

– Available in a coin or non-coin operated model