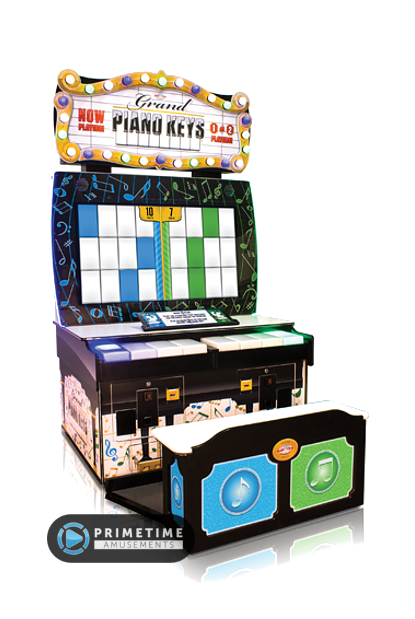 Combining a classical music touch with a fun game, this app-to-arcade game by Bay Tek Games is not just a great piece…it’s grand!

Grand Piano Keys is a video redemption game that lets 1-2 users at a time play some music while winning tickets. This is an enhanced version of the mobile app of the same name, the arcade version featuring a huge 55″ screen, support for two players at the same time and colored keys (blue for the left player, green for the right), and large piano key controllers (four per player side). You win big by quickly and consistently pressing the lit/colored keys as they scroll from the top down. Be careful though – one mistake and it’s game over!

– Large and attractive piano themed cabinet with a fun marquee

– Support for two simultaneous players – compete to see who plays the best!

– Ships with a ticket dispenser; standard coin door that is ready for either a Dollar Bill Acceptor (DBA) or card swipe

Want to see Grand Piano Keys in person? You can find it at the PrimeTime Arcade inside the X-Treme Action Park in Ft. Lauderdale, FL!