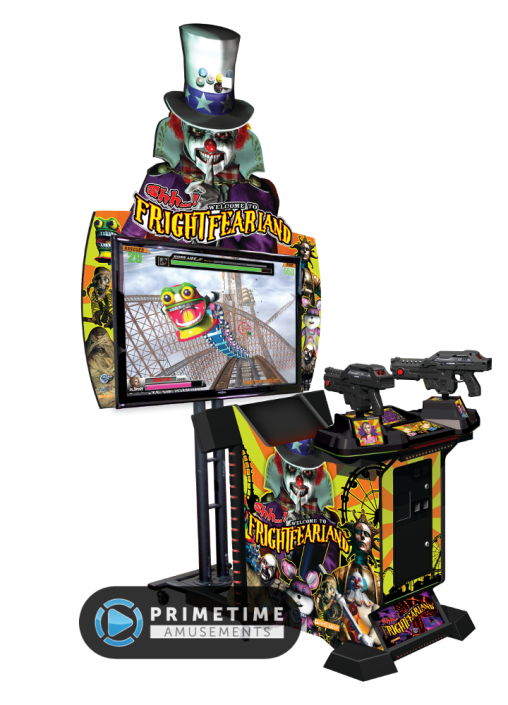 Shh…! Welcome To Frightfearland (or simply, Frightfearland) is an exciting video light-gun shooter arcade game from Taito and Global VR where you play as special agents investigating the disappearance of 100 missing persons situation. The follow the leads to a seemingly abandoned amusement park where the action begins.

Frightfearland is actually the sequel to Taito and GameWax’s “Haunted Museum” game release from 2009, called “Haunted Mansion 2” in Japan. It was re-themed for the US release but plays just the same. Find and free the hostages from the mechanical clowns and other creatures over 16 levels in this action-packed arcade shooter. Making the game more interesting than your typical arcade shooter flare, it also features 12 “mini-game” challenges and has three different endings depending on how you play. With this much terror-themed content, it will keep players coming back for more.

Check out Frightfearland in action from Amusement Expo 2013

– Tons of content! 16 selectable levels, 12 mini-game missions, 6 bosses and 3 endings to play for!

– Mounted, force feedback guns that were used in other GlobalVR titles like Aliens Extermination, Paradise Lost and The Swarm

– Produced in two models: Standard 42″ and Deluxe 50″; also made as a “Universal Game Kit”

– Also available as a kit! “GVR Kits” can convert other GlobalVR games such as Aliens Extermination, Paradise Lost or The Swarm. “Universal Kits” can convert just about any old cabinet (such as JAMMA cabinets) into the new game!