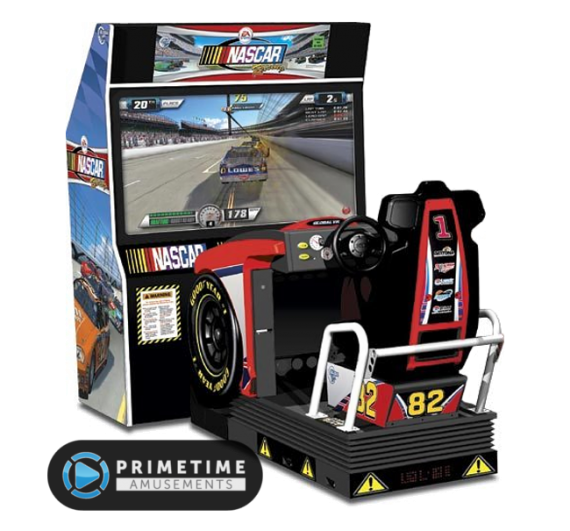 – Exclusive to arcades. Never released to any home console device
– 3-Axis Tsunami Motion System creates a realistic simulator experience
– Officially licensed NASCAR product
– Race on six official NASCAR tracks including a night track
– Deluxe version features a 57″ HD LCD display
– Powered by a standard PC using an nVidia 7600 series graphics card
– Standard racing controls includes a force feedback steering wheel, gas & brake pedals, and a 4-speed shifter
– Six speaker audio system plus a button to change the tune during the race
– Link up to 10 units for a multiplayer attraction (ver 1.1 software)
– Also produced in 32″ Standard and 42″ Deluxe cabinets; upgrade kits to switch over to NASCAR Team Racing were produced in 2010.
– This title is no longer produced by GlobalVR, having been released in 2007. Please call us about availability. All used models pass through PrimeTime Amusement’s “Certified Pre-Owned” program, which guarantees that the game will be completely refurbished and ready to operate upon arrival.