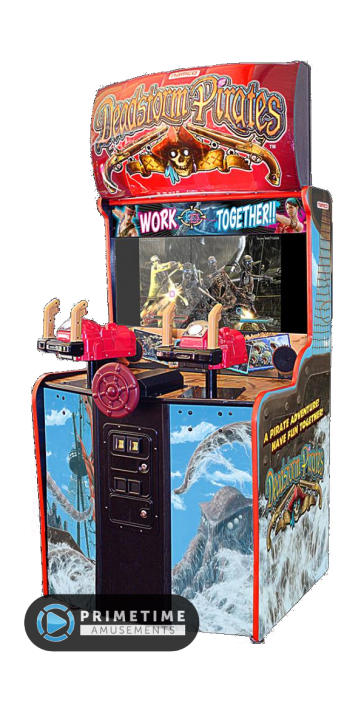 Brave the high seas & work together as you seek for fantastic treasure in Bandai Namco’s Deadstorm Pirates.

Produced in both upright and theater cabinet models, Deadstorm Pirates is a fun 1-2 player shooting game with an extra twist. In addition to confronting a wide variety of enemies, you are presented with situations where you must steer your boat using the pirate wheel controller in the center. There are even classic pirate ship battles where you bring your cannons to bear against other ships and giant sea creatures! All of this adventure is experienced over five stages (Special Edition software adds two for a total of seven) as you venture your way to find and claim “Poseidon’s Breath.”

This listing is for the Upright version of the game, which was produced for a limited time and is currently only available used. It also may not include the Special Edition software installed, please ask about availability and configuration details for any units that we may have available!

– Adds two complete levels to the game that are exclusive to arcades. Total of seven stages

– 1-2 player shooting game; combine your shots for a powerful blast

– Features a variety of enemies including mutant sea creatures, ghosts, bugs, animated statues and even a kraken

– Shots made in sequence will go towards your Combination meter, rewarding you with more points!

– A limited number of upright cabinets were produced, please ask about availability. Used models for the original edition might also be available

– Bandai Namco’s Deadstorm Pirates Upright is no longer produced, having been released in 2012; Special Edition released in 2014. Please call us about availability. All used models pass through PrimeTime Amusement’s “Certified Pre-Owned” program, which guarantees that the game will be completely refurbished and ready to operate upon arrival.