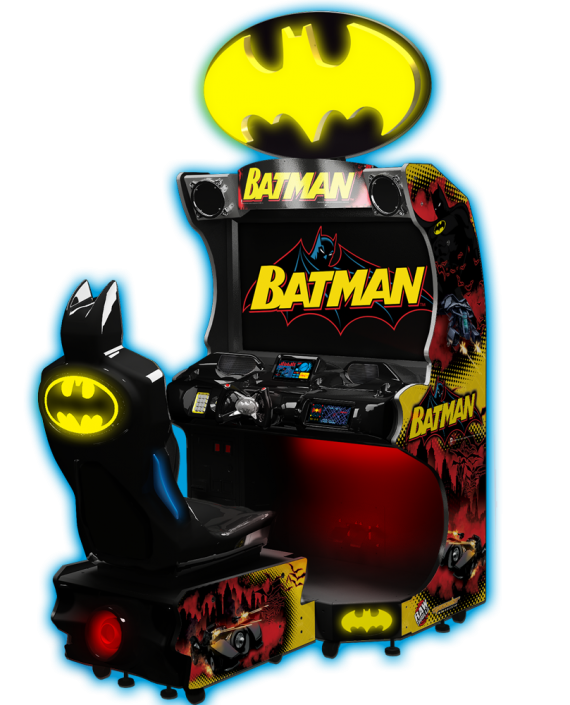 Many video games let you play as the Dark Knight but very few let you the ultimate dark driving machine – the Batmobile. As the third game by developer Specular Interactive (following H2Overdrive and Dirty Drivin’), you take control of the coolest set of wheels that a superhero drives in that never-ending quest to keep Gotham City safe.

When players begin a game of Batman, they first get to pick from nine Batmobile variations. These include the Batmobile from the 60’s TV series, the Tim Burton Batman films and the most recent Dark Knight movies. You then get to choose which villain you want to deal with – the ever smiling Joker, the uber-ripped Bane or Mr. Freeze, whose jokes always stay frosty.

Complete the different missions, driving through Gotham City and taking out enemy vehicles or weapons platforms. Power-ups such as missiles, Batarangs, or the Battering Ram help make your efforts a little easier as the enemies pile on. You’ll also get the chance to fly the Batwing for certain missions.

REFURBISHED STOCK: 10/11/22! – A Batman unit is currently available from a PrimeTime operated location in Florida. Each will go through our Certified Pre-Owned refurbishing program before shipping to you. Please call for pricing and lead time.

-Arcade exclusive – like H2Overdrive and Dirty Drivin’ before it, this game only calls the arcade home

-Over 1000 lines of dialogue were recorded for this game. What new line will you hear on the next play?

-Eye-catching cabinet that is loaded with flashing LED lights and a giant Batman symbol above the marquee.

-Easy to handle the controls with the specially shaped Batman steering wheel and a single foot pedal.

-High score Leaderboards for each mission and difficulty

-The cutting edge graphics are displayed on a 42” 1080p screen. The game engine that runs at 60 FPS while rendering 100s of dynamic light sources throughout the large city of Gotham.

-Link up to two units for multiplayer competition

-The game includes 2 coin slots but is compatible with DBA or card swipe readers.

Want to play Batman in person? You can find it at the PrimeTime Arcade inside the X-Treme Action Park in Ft. Lauderdale, FL!