Fort Lauderdale, FL, December 3, 2012: PrimeTime Amusements, a global operator, seller and event renter of video arcade machines and simulators, and its new theming division Prop Creations, are finally making their debut at Art Basel, known as one of the most prestigious art shows in the Americas for its groundbreaking visual art. PrimeTime Amusements was secured by Miami-based and Basel staple artist, Miguel Paredes, to build life-size renditions of a few of his paintings’ most famous characters, including the “Happy Buddha” and “Lucky Cat.”

“As a South Florida based company, PrimeTime Amusements is thrilled to be part of Art Basel – truly an icon in Miami,” said David T. Goldfarb, President of PrimeTime Amusements. “Further, it is a great opportunity for us to show the skills and talent of our team. We can now build anything you can imagine!”

Three of Paredes’ iconic paintings have been recreated in 3D, including “Lucky Cat,” “Happy Buddha with Pulghas,” and “Pulgha Rising.” After the pieces were sculpted out of foam by PrimeTime Amusements’ CNC 3-D Cutting Machine, each was detailed and carved by the team’s sculptor and then painted individually by Paredes.

“I’ve been creating art and sculpting my entire life. It’s been great working with everyone at PrimeTime Amusements,” said Paredes. “Their team of skilled craftsmen men using the most advanced equipment available leaves me confident that they will always do my art justice helping to bring it life!”

To view the art and attend the VIP parties held every night from 8:00 to 11:00, please contact: RSVP@miguelparedes.com. The Miguel Paredes Fine Art Gallery is located at 173 NW 23rd Street, Miami, Florida 33127.

Prop Creations is headed up by an art designer and team of sculptors with 40-years plus experience. All statues are primarily constructed from foam and hard-coated with paint, which ensures that the finished products are lightweight and easy to transport, yet waterproof with the ability to be kept outdoors. The PrimeTime Amusements’ team creates the pieces using a combination of CNC 3-D Cutting machinery and hand sculpturing. With the ability to create props, figures, and set-design, PrimeTime Amusements has become a one-stop solution for everything from architectural design and engineering to arcade game sales and operations. Learn more at www.propcreations.com.

PrimeTime Amusements is a global operator and provider of video arcade machines and simulators. Founded in 1992, PrimeTime Amusements goes beyond just selling and renting equipment; the Company also offers thousands of entrepreneurs and facility owners turn-key arcade consulting, planning, installation and operations solutions. PrimeTime Amusements specializes in new and innovative machines, refurbished high-end equipment as well as classic and more traditional arcade games. Learn more at www.whizzox.com/oldsite. Become a fan of PrimeTime Amusements on Facebook at www.facebook.com/PrimeTimeAmusements; and follow us on Twitter @PTAmusements.

Miguel Paredes was born in New York in 1966. He is an artist and urban realist who combines the exhilarating sense of New York graffiti art with the skill and perceptiveness of a truly exceptional artist. Growing up on 72nd Street in the Upper West Side of Manhattan, Paredes exuded early signs of artistic ability and accepted an invitation to New York City’s prestigious Fiorello La Guardia High School of Music and Art – immortalized in the musical and movie Fame – in the early 1980s. Paredes left New York to come to bourgeoning Miami Beach and took a studio at the Art Center of South Florida, where he became one of their most prosperous artists, focusing on mixed media and conceptual art. At one of his first showings he sold every piece in the exhibit and broke solidly into the Miami Beach art scene. His artistic success caught the attention of several local venues and they often offered their space to showcase Paredes’ work. He ultimately opened his own gallery, Miguel Paredes Fine Art Gallery, in the Wynwood Arts District in August 2010. Paredes is breaking new ground in exciting and innovative art movements. He continues to make his mark by further expanding his inspirational environment and simultaneously showcasing his works at local, national and international shows. In 2012, Paredes has upcoming exhibitions planned in London, China, and Seoul. Korea. Learn more at www.miguelparedes.com.

About Art Basel
From December 6 through 9, Miami Beach, Florida, will host the 11th edition of Art Basel, the most prestigious art show in the Americas. More than 260 leading galleries from North America, Europe, Latin America, Asia and Africa will take part, showcasing works by more than 2,000 artists of the 20th and 21st centuries. The exhibiting galleries are among the world’s most respected art dealers, offering exceptional pieces by both renowned artists and cutting-edge newcomers. Special exhibition sections feature young galleries, performance art, public art projects and video art. The show will be a vital source for art lovers, allowing them to both discover new developments in contemporary art and experience rare museum-caliber artworks. Learn more at https://miamibeach.artbasel.com/. 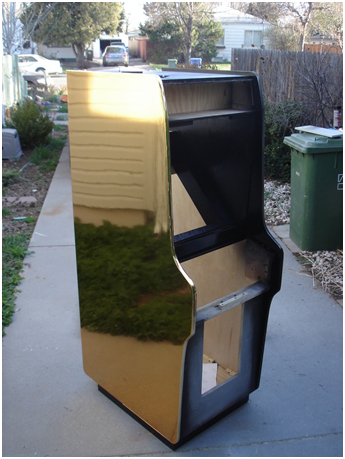