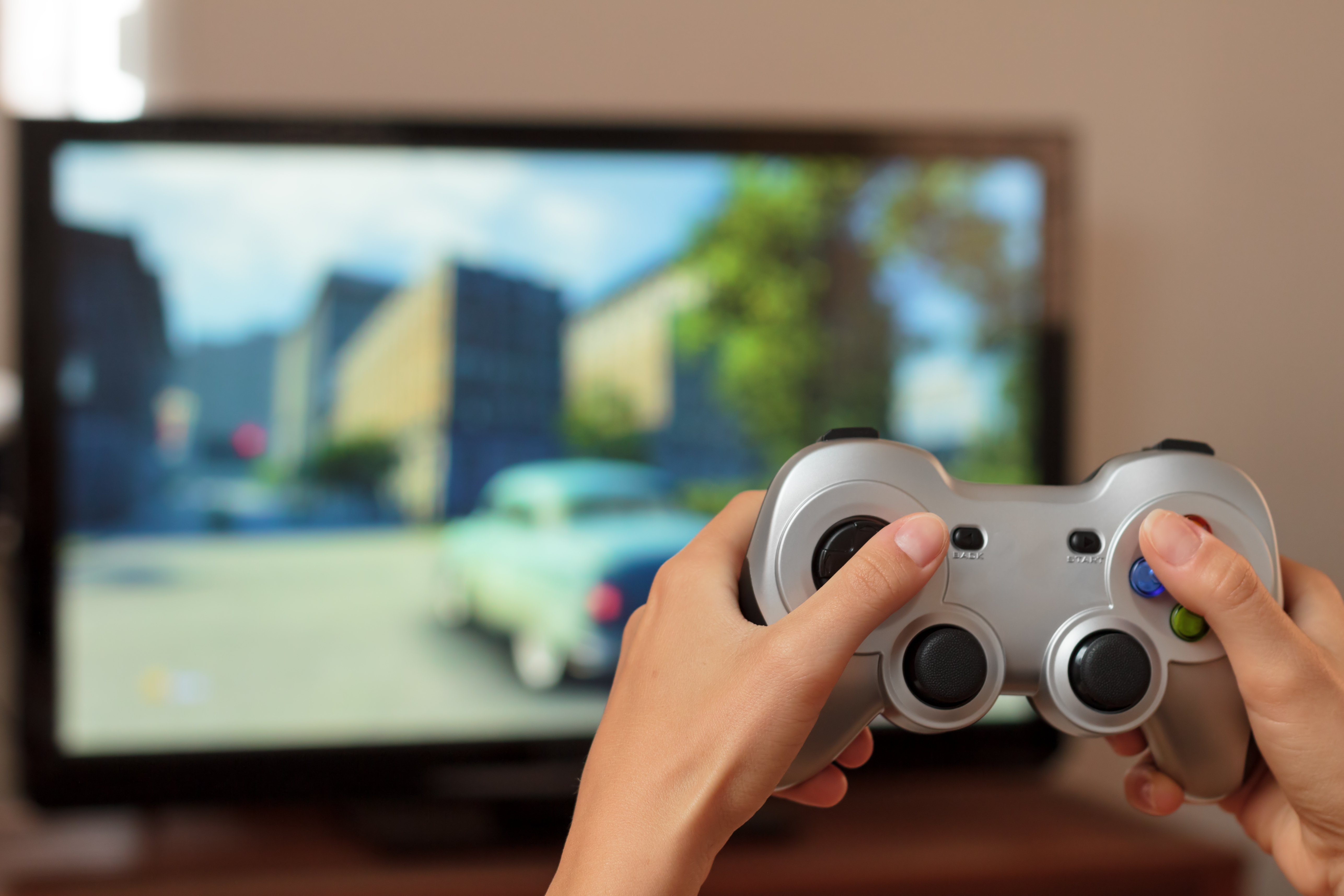 As far as old-school arcade gamers are concerned, kids today have it easy. Most video game titles today, including modern arcade amusements, are leaps ahead of what the kids enjoyed several generations ago. Back in the 70’s, the decade where electronic arcade gaming started to come to life, most advances in the industry came in the form of innovative game design such as concepts, settings, mechanics, and so on. Granted, there wasn’t really much to innovate from at the time, considering that the industry was still in diapers, which made every little detail a refreshing change of pace, and each new setting a revolution in game design. Remember when side-scrolling shoot em’ ups in space were new and groundbreaking? well, back in the 70’s and 80’s, these were all the rage. 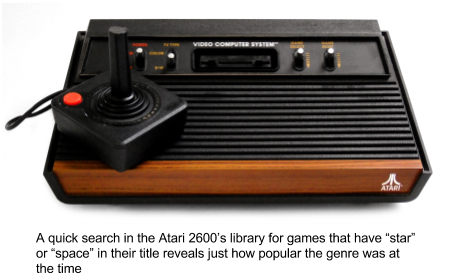 Arcade games, as well as video games in general, have definitely come a long way. But today we’re not here to talk about the obvious advances in graphical technology, or gameplay mechanics that, to this day, manage to keep us glued to the screen for hours on end. No, today we’re here to talk about a smaller type of hero, the one that gaming didn’t know it wanted at the time, but desperately needed nonetheless. We’re referring to none other than the ability to use an analog stick to move in any direction in-game or, at the very least, use it to move in the 4 cardinal directions, along with their 4 respective diagonals. This is called omni-directional movement, and it completely revolutionized the way video games were played at the time.

Today, it’s easy to take for granted our fancy controllers with dual-joystick setups, or fighting games that feature a stick for precision input of commands. But in the heyday of gaming, this wasn’t actually a thing; games would regularly experiment with button layouts and setups that would sometimes involve unintuitive methods just to move your character around the screen.

Pong, one of the first electronic video games to grace our lives via the myriad Pong Consoles that were widespread in the 70’s, was a good example of outlandish controllers done right. Sure, there wasn’t really a standard in the industry at the time, so instead of shunning it, gamers simply adapted to it. Players would hold a controller that would feature a disc or wheel, and would control the paddles by spinning said wheels. It was crude and primitive, but the game wasn’t exactly rocket science, so they could definitely get the job done. 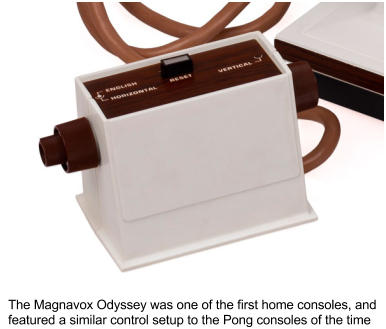 And speaking of home consoles, the Atari 2600 was one of the first platforms to include a joystick, as well as omni-directional movements as part of the default setup. This 1977 second-generation console used a controller that featured a joystick, and a single “fire” button, which served to perform any and every function in-game, from shooting lasers, to interacting with objects. Interestingly, the console seldom featured games that would make use of the free movement granted by it’s joystick, but it was still a nice addition. Furthermore, this was a feature that wouldn’t be reintroduced into console gaming until the fifth generation, when the Playstation 1 and Nintendo 64 arrived in the mid 90’s. Well, technically the Neo Geo did it first in 1990, but the console was so expensive that many families dropped it in favor of the more accessible Super Nintendo or Sega Genesis consoles. 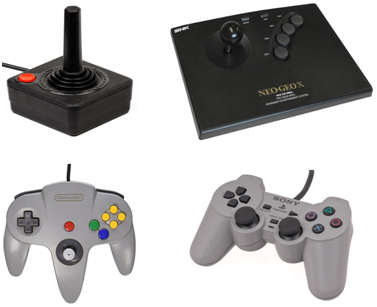 While omni-directional movement was certainly a logical step in the road towards modern video games, it definitely came as a welcome addition for gaming at the time. Imagine playing Galaga, R-Type, or Gradius in the 80’s, while being limited to 4-way movement. Instead of bobbing and weaving through enemies and obstacles, the player would be forced to move exclusively in one of the  cardinal directions, making the gameplay more difficult, stiffer, and definitely less enjoyable.

As far as arcade gaming is involved, this industry has also seen its fair share of controller standards, and it still does. After all, as opposed to console gaming, arcade doesn’t just put you behind the wheel (so to speak) of a character’s life, the games are also played on a big cabinet, where there is plenty of space for developers to innovate and experiment with new controller schemes. For example, the first Pong cabinets released in 1972 by Atari featured the aforementioned disc controls; it had a pair of discs installed into the cabinet, which the players would spin to control their paddles. Years later, in the late 70’s to early 80’s, Space Invaders and Pac-Man arrived and made use of the simple joystick + buttons layout, which would be used further down the line by a wide variety of other games, on a similarly wide variety of genres.

Regardless, arcade gaming can’t afford to sit on a single controller layout, that’s why we always see innovative designs such as the ones used in Dance Dance Revolution, car-shaped cabinets with a set of pedals and a steering wheel for racing games, or shooting games that make use of a prop gun to shoot targets (which was also featured on the third and fourth generation of consoles). Nevertheless, omni-directional movement also played a fundamental role in the development of new games, such as the first fighting games in the late 80’s and early 90’s, which made use of diagonals in order to jump forwards and backwards, to control the direction in which the characters were blocking, and so on. 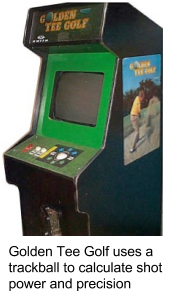 There are far too many games that benefitted from omni-directional movement to list here, but the truth is that, despite being largely taken for granted, this little piece of innovation revolutionized the way games were controlled, and allowed developers to work on more complex and engaging game mechanics. So, the next time you’re playing your favorite modern game, and you’re allowed to tilt the joysticks diagonal, take a few seconds to think about how your gaming experience would be if you couldn’t make use of omni-directional movement, be thankful, and move on.

Here at PrimeTime Amusements, we’re always working to provide the very best arcade game sales and rental solutions. If you want to place a specific order, or inquire about our wide variety of machines, feel free to call us at 1.800.550.0090, or drop by at 5300 Powerline Rd, Suite 210, Ft. Lauderdale, Florida, 33309.