When it comes to arcade sports games, few titles have managed to achieve such fame and success as the timeless “NBA Jam.” However, there was one game among the rest that, while not quite reaching this level of acclaim, was dangerously close to the popular basketball game: We’re talking about none other than “NFL Blitz Legends,”  the 1997 football game from Midway, in collaboration with EA Sports. And as luck would have it, this game also happens to be the subject of Arcade1Up’s latest addition to their ever-growing repertoire of affordable home arcade games.

This new arcade cabinet features all the bells and whistles that make Arcade1Up’s creations stand out, including custom artwork both for the side panels as well as for the riser. However, in this case, the team worked together with the NFL to provide the authentic Blitz experience, by securing rights to feature the iconic legends of the time. In this sense, you’ll find all the retro artwork such as the legendary football players using their old uniforms and logos of the time. Moreover, you’ll also find lineups and player rosters corresponding to their teams of the period.

In terms of gameplay, players can expect to find the best version of their respective games, all of which are designed to provide the same arcade experience as in the late ‘90s and early ‘00s, when they first came out. This is because, while the games feature all the same gameplay that made them so fun, they are also packed with features to bring them up to current standards, including the smoothest 60 FPS action, as well as WiFi capabilities for online play leaderboard sharing with everyone from around the world.

And speaking of games, you might have noticed that we’ve been talking in plural throughout this article. This is because the NFL Blitz Legends Arcade Game not only includes the eponymous game from 1997, but it also comes with the NFL Blitz ‘99, and NFL Blitz 2000: Gold Edition, all of which feature the same WiFi and performance enhancements as the first. 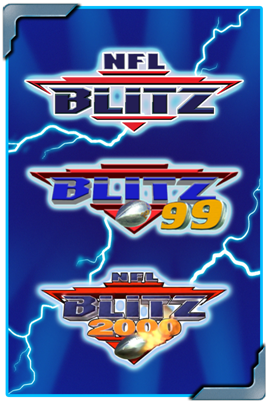 The NFL Blitz Legends Arcade Game is currently accepting preorders down in Arcade1Up’s product page. As is usual with games from this company, if you’re interested in getting one for yourself, you’ll need to be quick as they tend to run out of stock fairly quickly, which might have something to do with the fact that it’s only $600, with free shipping included in the price tag. Feel free to check out their website if you want to learn more about this awesome offering!