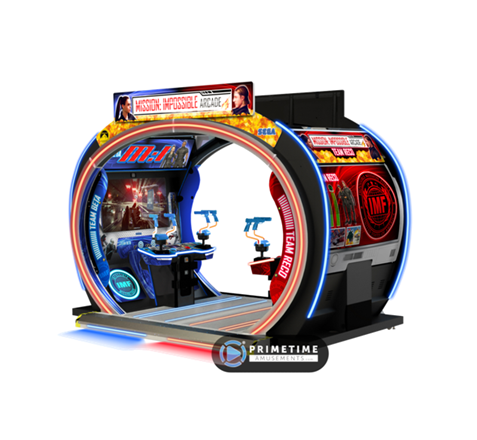 Mission: Impossible Arcade Update – It’s Coming to the US; But We Might Have to Wait it Out…

A few months ago, we wrote about Sega Amusements’ latest venture into the arcade gaming industry with the brand new rail shooter game, Mission: Impossible Arcade. On that occasion, we mentioned how the cabinet might have been slowly making away across the big pond into the US (the game is manufactured overseas in the UK) and arriving at a few select locations, but that it would be a while before it would be easy to find one. After all, at a reported MSRP of 32-grand, it’s not exactly an impulse buy, but it is a super impressive piece that is sure to bring people back to the arcade that grabs one.

Since M:IA was delayed a full year due to the ongoing lockdowns and travel and shipping restrictions, Sega took that time to give the game some extra polish, a fact which they proudly showcased in their latest gameplay footage videos. These new clips were released only a few weeks ago, at the beginning of July, and show direct capture footage of the game in action, in order to give viewers and potential players an idea of what they’re in for when playing this game. Sega Amusements conveniently put all these footage videos in a playlist so that anyone can watch them back to back. However, feel free to check out the three latest videos they posted below:

Now, while this game has shipped out to a few locations (primarily in Europe), US deliveries might still be delayed until later this year. That all depends upon the on-going stresses on the economy and particularly in regards to shipping, which was hindered in good part by the recent Suez Canal incident. That combined with certain on-going shipping restrictions has caused a big backlog in boat shipments, one that we hope to see return to normal sooner rather than later.

We’re happy to see that the game wasn’t canceled due to the pandemic, and for those few of us lucky enough to play the game already, as shown above, M:IA is definitely an awesome game that presents an interesting concept with light-gun shooters, what with its walk-in cabinet with controls designed to accommodate 4 players and 2v2 gameplay.

Are you looking forward to the new M:IA coming to the States? Let us know what you think!