Oh boy, have we got a treat for you in this month’s Getting Good.

Sinistar is a space shooter developed and released in 1982 by Williams, which combines some of the best elements of other popular games such as Defender and Asteroids, and cranks them up to 11 by adding its own unique tinge of chaos in the form of the evil Sinistar. Every level in this game eventually leads to a hectic cat and mouse battle where the player pelts the enemy with bombs while avoiding getting devoured by the ferocious monsters.

But we’re getting a bit ahead of ourselves. The main objective of Sinistar is to break asteroids and collect the crystals that pop out, while preventing enemy worker drones from collecting them. Whenever a drone picks up a crystal, they’ll take it to the site where they’re building the Sinistar spaceship. Once they collect 20 crystals, Sinistar will be built and the evil entity will rush towards the player to devour them. At this point, the game goes from gathering crystals to actually fighting Sinistar. The idea is to gather enough crystals before Sinistar is built, in order to have enough ammunition to face off against the enemy. The stage ends when Sinistar is defeated.

In this guide, we’re going to show you how to get good and score high in this awesome arcade game.

Sinistar, like most arcade games of the early ‘80s, is quite easy to control, though hard to master. The joystick is used for moving your ship around space, while the fire button controls your mining laser to destroy planetoids or any enemies in your way. Meanwhile, the bomb button is used to launch a homing bomb at Sinistar.

This game features a scrolling background, with your ship always in the middle of the screen. The joystick is a special 7×7 model, which means that you can move freely in 49 directions, giving you lots of liberty to dodge and zoom around space. Moreover, while you need to carefully aim your laser to mine asteroids and defeat enemies, the bombs automatically home in on the Sinistar, which makes them great tools for actually tracking the beast when he’s offscreen.

There are only 3 types of enemies in the game:

It’s important to note that, with the exception of Sinistar, the enemies in this game have no collision damage. When you bump into one of them, you’ll just bounce off flying in the opposite direction. Keep this in mind when you’re racing against a Worker to fetch a stray crystal; sometimes, it’s better to just bump them out of the way if you can’t land a precise shot.

It’s impossible to prevent the Sinistar from being built and, in any case, you need this to happen in order to proceed into the next level. However, the general idea is to collect as many crystals as you can before Sinistar is revived by the workers, while avoiding getting shot by the Warriors. Even though Sinistar takes 20 crystals to build, you only need 13 bombs to kill him at any given moment. In this sense, you need to have at least this amount of bombs before facing him. 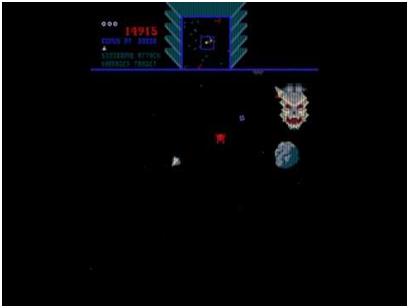 There are 4 different types of stages in the game, which loop after beating the first one. After you beat the first level, you’ll be warped to the Worker Zone, followed by the Warrior Zone, the Planetoid Zone, and the Void Zone, before circling back into the Worker Zone. True to their names, there is a higher amount of specific elements in each stage. In this sense, there are more Workers, Warriors, and Planetoids, in the Worker Zone, Warrior Zone, and Planetoid Zone, respectively. Conversely, the Void Zone has very few planetoids, which makes restocking bombs before the battle against Sinistar very tough.

In general, your strategy will always revolve around collecting as many crystals as you can before Sinistar is built. Remember that you need at least 14 crystals—fewer than that and you simply won’t have enough to beat the big bad.

However, you’ll ALWAYS want to collect more crystals than what you actually need since your bombs carry over onto the next stage. Especially in the Planetoid Zone, you will need many extra bombs, considering that the Void Zone is almost barren and you’re going to have a hard time collecting crystals there.

As you finish stages and go onto subsequent cycles, there will be an increasing amount of obstacles and challenges in your way. For instance, the second Warrior Zone will have even more Warrior Drones than the previous one, and the same applies the third time around, and so on.

When it comes to fighting Sinistar properly, one of the first things you want to do as soon as he revives is to launch a bomb. If you pay attention to where the bomb starts to drift, you’ll know exactly where Sinistar is approaching from, since the bombs always home into him. If you know where he is at all times, all that’s left is to dodge when he charges at you. Which is pretty easy once you master his movements (and can drown out his incessant roaring with sheer willpower). If you ever run out of bombs while fighting Sinistar, you’ll need to quickly find more planetoids and break them with your laser while dodging the screeching menace barreling towards you.

And that’s all there is to getting good at Sinistar. Of course, practice makes perfect. The best way to get a clean kill on Sinistar is to have enough bombs first and foremost, and then get it to trail behind you while you pelt it with bombs. In this sense, he’ll get slightly knocked back and will never reach you, while you’ll get some easy hits in. Just remember to never stop firing your laser as you’re bound to run into a few enemies during your encounter.