Q*bert was a hugely popular game back in the early ‘80s, in a time where video games were enjoying their “Golden Age” in Japan and the world, in general. However, at a time where the industry was close to crashing in the West, there were only a handful of titles that managed to stand out in a sea of mediocre games. Q*bert was among those that shone brightly. After all, who doesn’t remember the tile-hopping, color-jumping, ball-eating melonhead that is the game’s eponymous main character?

Like many other games of the time, the concept of Q*bert is simple: The objective was to control Q*bert, a weird looking, egg-shaped character with an elongated, cylindrical mouth, and hop on all of the tiles in a level to change them to a specific color. As the character lands on a tile, it will change its color. When all the tiles have switched over to the target colors, the level is completed, after which the player advances to the next challenge.

However, along the way, the player will encounter many different enemies and challenges that’ll prevent Q*bert from achieving his objective. In this guide, we’re going to explain the basics of this game, as well as provide several tips to improve your performance and, with practice, set some high scores.

As we mentioned above, the objective of this game is to jump on every tile to change them to the required color. This is merely done by moving your character from tile to tile, which is easy enough. However, you’ll eventually encounter several enemies that’ll work against you, among which you’ll find the following:

First and foremost, the most essential thing that you’ll always want to keep in mind when playing Q*bert is color coding. Anything green is usually beneficial. This fact includes the green balls that drop from the sky and have the same behavior as the red balls. However, if you pick them up before they fall off the platform, they will freeze time for a few seconds, giving you free rein to move without worrying about the enemy. Similarly, the Sam and Slick enemies are green and can be safely picked up with no risks. In other words, if it’s green, it’s not dangerous. 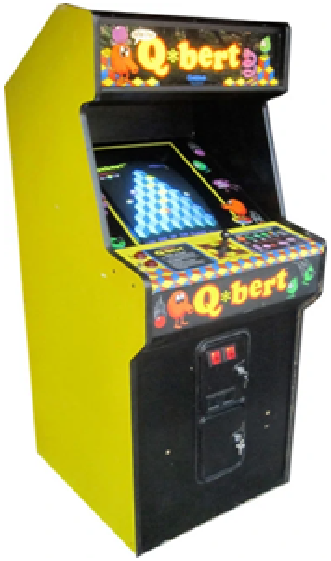 In the same vein, it’s imperative that you go out of your way to collect the green items/characters in your game. This is to maximize your score by allowing you to safely traverse the stage without fear of enemies (in the case of green balls), or to prevent enemies from undoing your work (in the case of Sam and Slick). These things are definitely worth the hassle of collecting, even if it’ll delay the completion of the level by a bit. However, it’s vital to keep spatial awareness at all times to avoid running into obstacles on the way to collect a green ball, for example.

If you’re confident about your skills at avoiding Coily, you’ll receive extra points for any unused discs on the stage. In this sense, you’ll get more points by outmaneuvering the purple snake instead of using the discs to eliminate it. Speaking of which, you’ll get extra lives after reaching 8,000 points, and then every 14,000 points from that moment onward.

It’s crucial that you plan out your movements from stage 4 as subsequent jumps on the same tile will roll the colors back to the middle position. This is also important since tiles from this stage onward will require two jumps to get to the desired color. In this sense, if you roll back to the middle color by accident, you’ll need to jump on the tile again to achieve the objective, which can really add up if you accidentally roll back multiple tiles. From stage 5 onward, the tile will roll back to the default color on an extra jump and will require two additional jumps to achieve the desired color, increasing the difficulty considerably.

As a general rule of thumb, you’ll want to work your way down to the bottom and focus on converting the lower tiles first. In this manner, you’ll deal with the most tricky tiles first where there are few enemies on the screen and, if you mess up later on while converting the topmost tiles, you won’t have to backtrack too much to correct the issue. 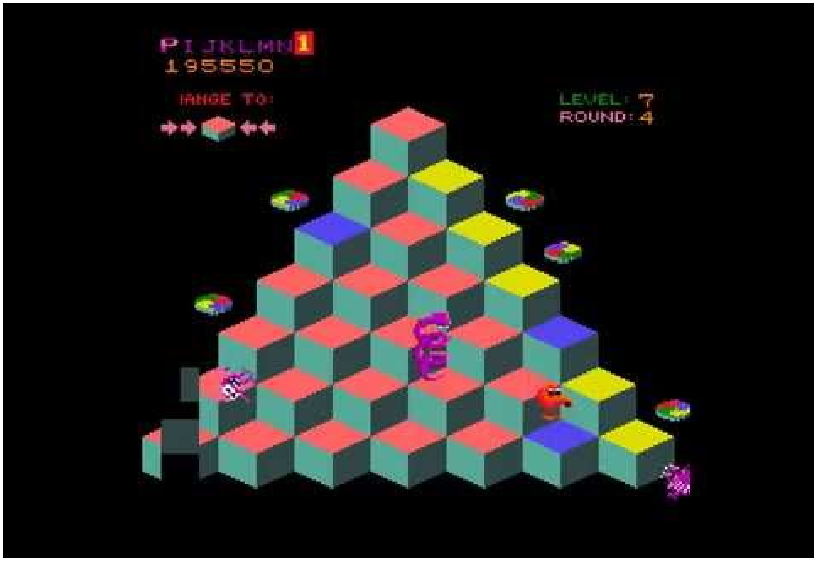 Getting good at Q*bert is mostly about defining a tiling strategy. However, you must also factor in the possible enemy spawns that will force you to adapt on the fly and stay alive while completing your objective. For this reason, practice is critical, though knowing what to expect is definitely half the battle in this case.