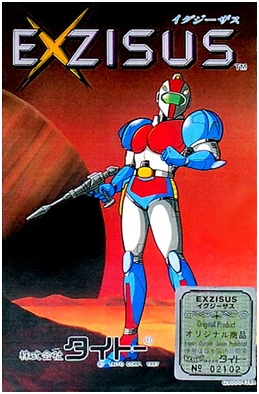 We sometimes enjoy hanging back and taking a few hard-earned hours to sink into our hobbies, which among other things, happens to be enjoying video games. As purveyors of the finest arcade video games and amusements, well, we can’t help but have a soft spot for all games that come in large wooden cabinets.

Today, in our ongoing series where we share tips and tricks for old arcade games, we wanted to focus on a little game called Exzisus, which most of us probably didn’t get to enjoy in a proper arcade since it was only released in Japan back then. However, later in 2005, this game was featured in Taito Legends, a collection featuring lots of different classic arcade games, for the PlayStation 2, Xbox, and PC platforms.

Exzisus is, like most other video games of the ‘80s, a side-scroller space shooter title, much like Macross, Life Force, or Gradius, only this time you get to control the powerful space astronaut Exzisus, who can not only shoot lasers at all enemies in front of him, but also drop devastating bombs from his jetpack as he flies around from stage to stage. And in this brief guide, we’re going to talk about the basics of how to survive in this game, as well as how to defeat the four different bosses that await at the end of every stage.

As usual, we’ll start by taking a glance at the controls in Exzisus which, like other titles of the time, are not complex at all.

Players in this game have access to a standard 8-way joystick to control the movement of the Exzisus, as well as a couple of buttons, one of which is for shooting the astronaut’s lasers (and also make him drop bombs and launch missiles from his jetpack at the same time), and the other is for launching his bird and dog companions at enemies, which attack and come back a few moments later. 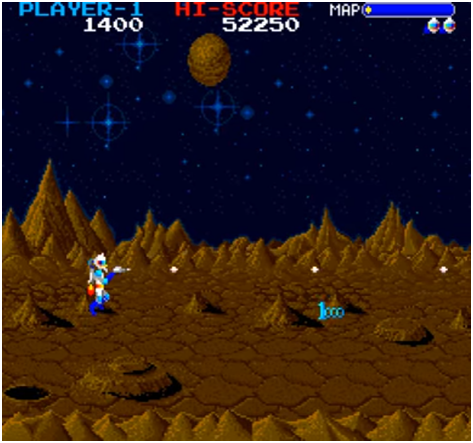 Like with many other space shooters, while the player has full control over the Exzisus’ position on the screen, the stage is always scrolling forward, with enemy formations flying into the screen at certain intervals. The idea is to survive until the end of the stage, where the enemy bosses await. Keep in mind that, while necessary for maximizing your score, you don’t need to kill every single enemy to progress; simply surviving their onslaught and letting them fly off-screen is sufficient in this regard.

It’s worth noting here that, on the top right of your UI, you’ll find a “MAP” gauge that represents the progress you’ve made in the current stage, as well as the remaining distance to go to reach the boss. However, when you reach the boss, this gauge will turn into the “DMG” bar, representing the boss’s remaining HP—once this bar goes completely red, the boss keels over, explodes, and you’ll be on your way to the next stage. 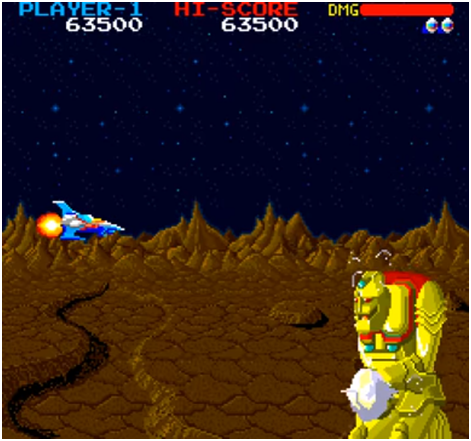 One last tip to consider here is that you should always pay attention to the stage environment. If you look at the background, you’ll sometimes be able to see certain enemies emerging and flying off-screen, only to appear shortly after, attacking you. Paying attention to your surroundings can help you prepare for oncoming waves at any moment.

While making your way through the stages, some enemies might drop certain powerups, which are capsules with letters that you can pick up to gain different effects. The capsules that you can find in Exzisus are the following: 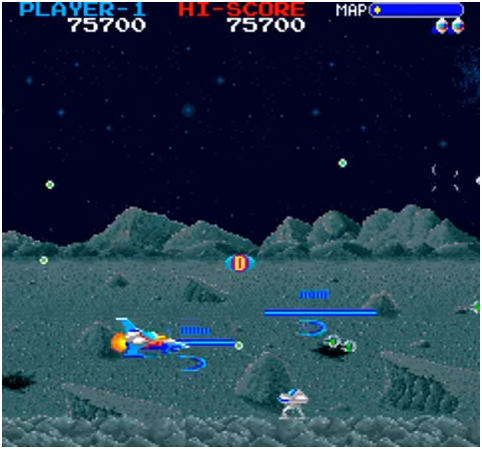 As you can see, there are literally no bad powerups in this game. So while it might be difficult to discern which capsules you’re getting amidst the chaos of the stages, you can simply pick them up as they drop, and you’ll be better off for it.

How to Defeat the Four Bosses in Exzisus

When it comes to actually navigating through the stages in Exzisus, practice makes perfect. This is the type of game where, even if we described the stages and the enemy formations that will attack you in each, you’ll still have to actually navigate, dodge, and shoot your way to victory. As such, we’re only going to be focusing on the most constant enemies in the game, which are the bosses.

There are four bosses in this game, which appear once you reach the end of each stage. Here’s an overview of each of these tough enemies, as well as how to beat them:

This big yellow fiend walks up to the stage from the right and immediately starts chucking projectiles at you from his head and belly. This one is more of a straightforward bullet hell fight, as you’ll have to balance dodging countless projectiles, with keeping the pressure up so you can do enough damage. 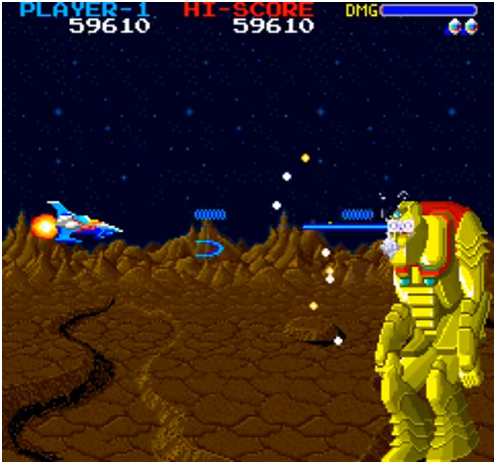 To defeat this big fella, just shoot him on the green spot on his head until the weak spot disappears. Afterward, you’ll have to shoot him in the belly until he’s defeated.

This one is quite similar to the Gold Moai, even to the point where his weak spots are the same, and so are his attack patterns. One of the only differences is that he also shoots lasers along with his projectiles. These lasers are much faster than the other projectiles, so you always have to stay on the move to avoid getting hit. 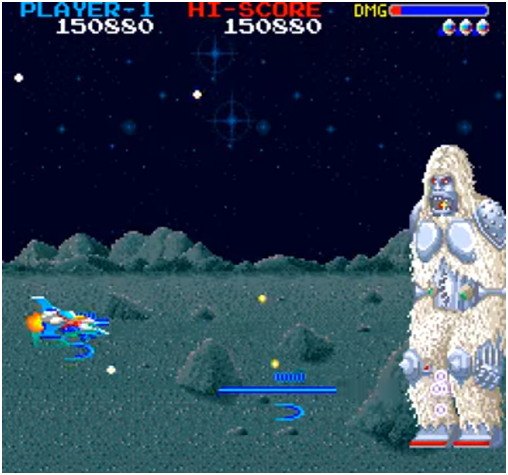 After destroying the weak spots on his head and belly, the Yeti will explode just like the Moai. However, instead of dying outright, his disembodied head will fly back and continue attacking you by launching projectiles from its mouth. After shooting it for a bit, it’ll finally explode for good, indicating the end of the stage.

This boss can be quite tricky to defeat, especially because his only weak spot is in his mouth, which he’s always guarding with his claws. In order to actually do some damage to this guy, you’ll need to wait until he shoots lasers from his claws, which he does by lifting them into the air, leaving his mouth exposed for a few moments. In this sense, the best way to beat this guy is by actually sticking at the same level as his head, and making careful movements to avoid his claw projectiles, as well as the lasers he shoots from his tail. 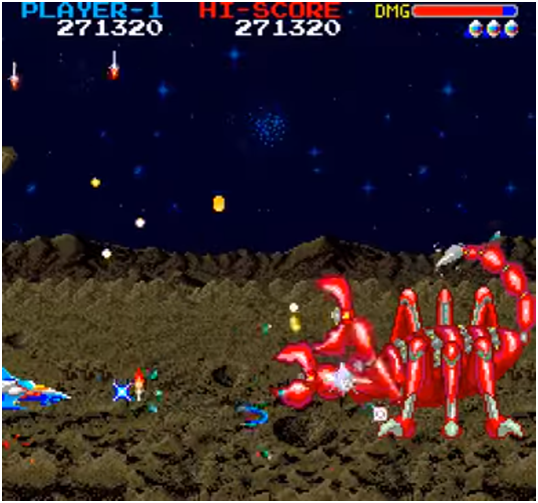 This one is somewhat of a damage check—as long as you can stay in front of him and keep the pressure up, he’ll die very quickly.

Last but not least, the final big bad of the game, who is understandably the toughest as well. 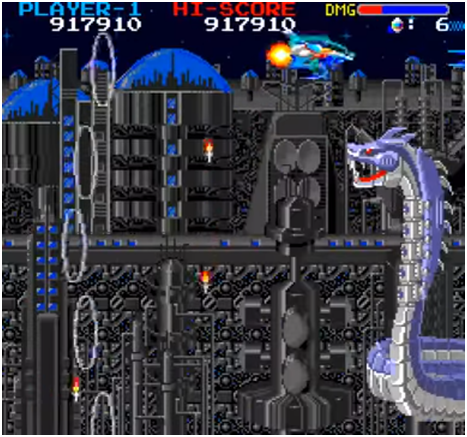 Violet Salamander covers over half of the screen with its long, serpentine body, and can shoot projectiles from several segments of his upper body. Additionally, whenever he leans back and spreads his hood, this means that he’ll use his signature attack shortly after, which is a series of five large circles that shoot outward in a fan pattern. To avoid them, you’ll want to stick to the top of the screen and fly towards the boss, so that the spreading circles don’t hit you as they fly by. Finally, his last attack is just a laser that he can regularly shoot from his diamond-tipped tail.

The key here is to not only avoid its many projectiles, but to try and stick to the upper half of the screen, in order to always dodge his fan attack. At the same time, you should never stay in one spot, even if you’re safe from projectiles, since this will just make it so that you get one-shot by the tail laser.

And that’s it for our guide on Exzisus. Once you defeat the evil Salamander and its cronies, you’ll be sent back to stage 1, after which the game gets tougher and tougher with every cycle. How long can you go?

Pac-Man Turns 42 Years Old, Celebrates it by Partnering With Epic Games for a Surprise Fortnite Collab