If we had to prove that the ‘80s were a time where everything was fair game when it comes to videogames, then we’d definitely point you towards Crazy Climber. Developed and published by Nichibutsu in 1980, this game was definitely a departure from the most popular titles of the time. Despite being quite simplistic, just like most games of this period, Crazy Climber was quite unique in both its mechanics and its presentation. 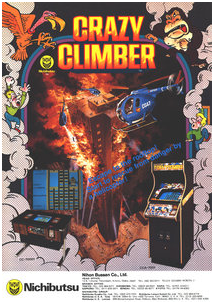 Released against the backdrop of  ‘space shooter mania,’ this game features a deceptively simple concept: You’re a dude who’s trying to scale skyscrapers barehanded and without any type of safety gear. As you climb, you need to avoid the various hazards that are raining down on you and climb your way to the roof of each building, where a chopper is waiting for you to climb on and make your grand departure toward the next level.

Considering many people are still at home social distancing, we want to dedicate our next few articles to writing about arcade games that are readily available for everyone to play. In this case, Crazy Climber is available for the Nintendo Switch as part of their Arcade Archives series. You can easily purchase it and enjoy it on your console from the comfort of your home.

Without further ado, in this guide, we’re going to talk about how to get good at Crazy Climber.

Crazy Climber is quite unique in the way it’s played. Specifically, climbing the building isn’t as simple as holding up on the joystick and watching as your character makes his way up. Instead, players have two joysticks, one for each hand, that they must alternate rhythmically in order to climb at a steady pace while maneuvering around the various hazards along the way.

Each joystick acts independently from the other, meaning that you can move each hand individually in order to fine-tune your movements and avoid hazards while climbing. In this sense, climbing becomes a process of moving one stick forward, then back to pull yourself up, while pulling the other joystick forward and then back. By alternating these movements rhythmically, you’ll be making your way upward in no time! Of course, these movements are easier said than done and require a bit of practice before mastering them.

Avoiding Hazards and Climbing to the Top

Instead of giving a traditional walkthrough for Crazy Climber, we think it’s best to focus on explaining the hazards that you will encounter in this game, as levels consist of a combination of these threats until you make it all the way to the top. The only elements that change in each level are the layout of the building you’re trying to climb and the order in which the hazards present themselves. 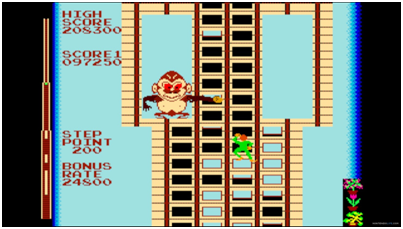 One of the most common hazards in Crazy Climber, which consists of windows that open and close. If you’re hanging on a window when it closes, you’ll fall and lose a life. Always try to avoid climbing on windows when possible, and whenever you DO need to pass through a window, do so quickly and only while they’re open.

As you progress through the game, these windows will open and close in faster and more erratic patterns, making it difficult to climb over them.

We gave them this name for lack of a better term. These hazards are just people that peek out of windows and throw stuff straight down at you. If they hit you enough times, or if you happen to be moving sideways to another window and the stuff they throw hits your arms, then you’ll fall and lose a life.

The best way to circumvent this hazard is to simply move out of the way of the objects they throw. If this isn’t an option, then it’s better to simply line yourself up with the falling object, and let it hit you straight on the noggin. You’ll fall if you get hit enough times, but at least you’ll be able to tank a few hits this way.

As you progress through each subsequent playthrough, these enemies will become more aggressive and start to throw larger objects, which might knock you down in fewer hits.

These birds appear in certain sections of each level, and they simply throw eggs and poop at you (gross!). In the beginning, they’ll throw only a few projectiles per run, giving you plenty of time to sidestep them. However, in later levels, they can throw as many as eight projectiles per burst, which makes it difficult to dodge their assault.

These huge enemies appear near the middle of every level, usually in the parts where the layout switches to be only two panels wide, with two large gaps on the sides. The ape appears in these gaps, and alternates swiping at each side of the path. Before he throws a punch, he pounds his chest a few times, and after every swipe, he changes position to punch at the opposite side.

In order to avoid him, you simply must wait until he punches one side, and then move across while he’s busy trying to punch the other side.

These are arguably some of the most difficult hazards to dodge, especially since they tend to fall from the sky in diagonal patterns instead of straight down. They first appear in the second stage and simply consist of falling objects that you need to dodge. However, with luck, you could tank a hit or two from these if you hold back on both sticks before they hit you. This will make your character brace for impact and might help you to survive. Keep in mind that this only helps for the first wave of beams and dumbells of each building, though.

Some levels will have a large Nichibutsu sign with live wires flailing on each side. These aren’t really dangerous hazards since you can always survive as long as you cross quickly across the wires. However, if you stick around too long, you’ll get shocked enough that you’ll fall and lose a life.

Large Crazy Climber signs that fall from the sky, bouncing on the sides of the building as they careen downwards. These signs don’t move laterally, but are wide and take up lots of horizontal space, so quick reactions are crucial for avoiding them. These hazards appear from stage 3 and onward. 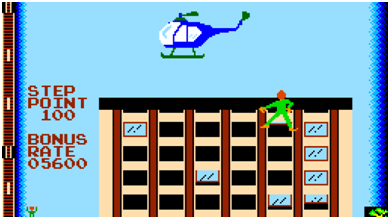 Most of these hazards appear in every single stage in Crazy Climber. Knowing what to expect from each is paramount for making it far in this arcade game. Once you survive each of the four levels, you’ll circle back and start from the beginning with increased difficulty, like in most arcade games of the time. The game ends when you lose your last life.

Hopefully, with the information we’ve shared in this short guide, you’re prepared to deal with all the hazards that rain down during your frantic struggles in Crazy Climber. Give it practice and you’ll be feeling like “Spider-Man” before you know it!