During the inception of video games as an entertainment medium, there was a theme that stood out among the vast majority of titles, space shooters. Mostly due to the fact that these games originated and gained traction in the ‘70s, with the space race fresh in the minds of the entire world, a good chunk of the games of the time were set in the vastness of outer space, and the objective was, almost always, to shoot and destroy the unrelenting hordes of aliens hellbent on destroying you.

Take Space Invaders, for example, one of the most popular space shooter games at the time. This had you fighting against, you guessed it, invading aliens. This continued in games like Galaga, Asteroids, Defender and others. However, while space shooters were definitely a hit at the time, this genre extended far past its usual setting and went on to inspire many titles in other settings.

Commando is one of such titles inspired by space shooters, but it was grounded in a more realistic setting, that of jungles and caves. In this sense, while the general gameplay is similar to that of a space shooter, you control a single lone soldier instead of a spaceship and have to make your way through several levels and environments to breach the enemy walls and destroy their forces.

Developed by Capcom and released in 1985, Commando is a popular vertical shooter and the inspiration behind other famous titles (or infamous, as some would say) such as Ikari Warriors. Furthermore, its legacy extends far past this game as the main character, Super Joe, also appears in the Bionic Commando series, which was also developed by Capcom, released a few years later, and went on to create its own standalone legacy.

In this article, we’re going to show you the basics of Commando, as well as how to get good at the game.

Considering that the vast majority of the gameplay is the same from the beginning to the end, and what changes most between levels is the enemy variety, we will be focusing more on the different foes that you will encounter in this game, and provide only some basic survival and strategy tips further on.

The objective in Commando is to make your way through the levels and reach the end. However, along the way, you’ll encounter throngs of enemy soldiers and a wide variety of foes barring your path, which you’ll have to promptly dispatch to keep moving forward. Keep in mind that, no matter how many enemies you kill, they will never stop coming, so the idea is to simply open a path and continue moving while dodging the enemy fire and grenades. 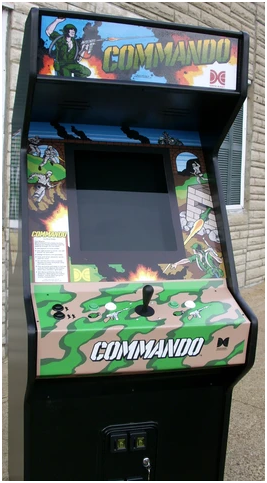 The controls are fairly simple:

Despite having a wide variety of enemy types, most of these foes are somewhat fragile, as the majority die with around one or two shots. However, the same goes for Super Joe, which makes the best way of winning at Commando to simply avoid getting shot or blown up. Luckily, knowing your foes is half the battle, so here is a list with all the enemies you’ll encounter in this game.

Despite the vast enemy variety that you’ll encounter on every stage, the idea of Commando is to simply press onwards. To this end, you can even choose to ignore the enemies, dodge their attacks, and keep moving north, running to the end of the stage, which is usually the best strategy. However, you might want to kill enemies to rack up points and score extra lives. You get one extra guy at 10,000 points, and then another every 50,000 points after that. Nevertheless, at the end of every level, you’ll need to defeat several waves of enemies before advancing to the next stage, which is this game’s version of boss battles.