Today, we wanted to talk about a 1985 game that’s quite interesting, mostly because it takes a very simple concept such as driving in a 2D side scrolling setting, and adds a bunch of different arcade elements to the action. The result is a game that is not so much about driving or racing but an arcade title where the objective is to drive across every single inch of the stages, while avoiding hazards and other vehicles. Oh and your car can also jump 10 feet in the air to reach upper levels, as well as drop down to lower platforms without a scratch. Did we mention it can also fire tin cans at other vehicles to make them spin out of control, and then ram them out of the stage for extra points? Because it can totally do that as well.

City Connection is a fun arcade game for those who enjoy a vibe similar to Pac-Man, in that its objectives and gameplay loop are similar in practice, but with a wildly different setting. And if this is something that might interest you, then this guide is for you. In the following paragraphs, we’ll be giving a brief overview of the basics in City Connection, as well as sharing a few useful tips and tricks to optimize your gameplay and set those high scores.

The Characters and Controls

Like with most arcade games of the time, City Connection features a very simplistic control scheme, where the difficulty comes not from controlling your vehicle, but actually from navigating the levels and avoiding obstacles. In this sense, this game has a standard control scheme consisting of a joystick to determine the direction in which the vehicle is moving, and a few buttons to control features like shooting tin cans, jumping, and setting the game to 1P or 2P modes.

It’s worth pointing out that, when it comes to the movement in City Connection, there are two important factors to consider: The first is that, while you can change directions freely at any moment using the joystick, your vehicle always does a long turning animation. You can’t change directions again or jump until this animation is finished, so always think twice before moving. Moreover, when it comes to jumping, pressing the button will get you through some of the obstacles in your way, if you time it correctly. However, if you wish to ascend to a higher platform, you need to hold the button down while holding the joystick up to unleash a higher jump. 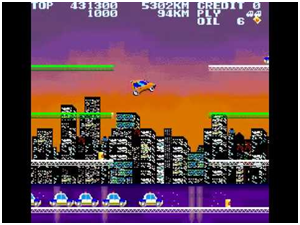 Now that we’ve talked about the controls, let’s go ahead and go over the different characters that you’ll find in City Connection. Luckily, there aren’t too many of these, which helps keeps the game nice and simple:

Spikes, on the other hand, are much more dangerous, though they only appear when you’ve been on the same stage for too long. These hazards shoot up from under the ground and give you a split second to react. They are very difficult to avoid normally.

Now that we know about the basic objectives and elements that you’ll find along the way, let’s talk about a few tips and tricks that you can use to improve your gameplay and set some high scores: 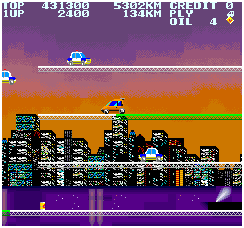