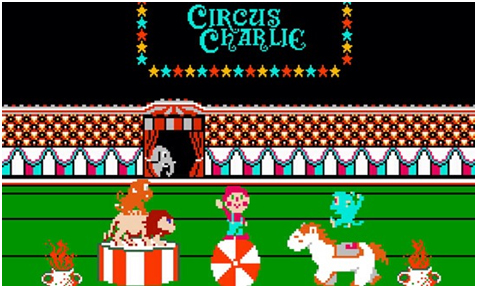 Circus Charlie was among one of my first experiences in arcade gaming. The game was developed and published by Konami in 1984 for the arcade and was ported to the MSX in the same year. 2 years later, the game was also ported to the Nintendo Famicom, followed by the Commodore 64 in 1987. Furthermore, the game was also re-released alongside other famous titles of the time as part of the Konami Classics Series: Arcade Hits collection for the Nintendo DS.

The premise of the game was quite simple: the player controls a circus clown named Charlie and has to go through several stages and surpass all the obstacles contained in each one of them while collecting the most amount of points possible in order to set a high score. There are six stages in total, after which the game repeats from the beginning with a faster pace and increased difficulty. In this sense, the game becomes a match of endurance where only the most skilled can reach the higher difficulties and set the best scores in the arcade.

On each stage, Charlie will have to perform many tasks, most of which are dangerous and may consist of dodging obstacles, jumping through flaming hoops, walking on tightropes, and avoiding animals, to name a few. Each match is also a race against time, as the player is awarded additional points for rapid completion of each stage, which is a quintessential mechanic for those who want to get the highest possible scores.

In this article, we’ll go over each one of the stages and provide tips on how to complete them while maximizing your score in the process. Granted, with these type of games, practice will always make perfect. However, knowing is half the battle and, in that sense, you’ll likely perform better if you know what to expect:

This stage consists of Charlie riding atop a lion across a stage filled with flaming hoops and burning canisters of oil. Charlie has to time his jumps in order to clear each and every one of the obstacles and make it to the very end. Furthermore, there are several small hoops floating high in the air that Charlie is not required to jump through. However, jumping into said rings will earn the player a money bag which will go towards his or her score, so collecting them becomes a must if aiming for a high score.

However, there’s more to this stage than initially meets the eye. Let’s take a look at the hidden mechanics in this level: 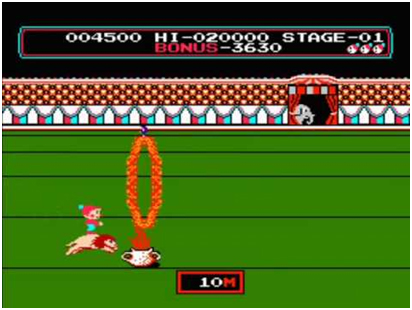 This stage consists of Charlie walking a tightrope and dodging monkeys as they charge towards him. The brown monkeys are slow and predictable. However, the purple monkeys run faster than their brown counterparts and can leapfrog the slower monkeys if they run up behind them. If a player manages to jump over both a brown monkey and a purple monkey (as the latter leapfrogs the former), he will receive a 2000 point bonus, though this requires precise timing to achieve.

There is only 1 secret in this stage: As you reach the end and prepare to dismount into the podium, you may instead walk underneath it and touch the right side of the screen to make several moneybags appear, granting you a 5000 point bonus for your troubles. 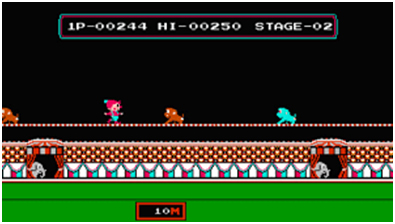 In this stage, our brave clown protagonist must jump across a sea of trampolines, taking care not to touch the fireballs and knives thrown by fire breathers and jugglers below. There are no tricks to this stage; you just need to get really good at timing your jumps in order to complete it. This stage requires no inputs other than the left and right buttons to steer Charlie in the right direction. Each trampoline allows up to 4 bounces, each one launching Charlie increasingly higher. After the fourth, he is sent crashing into the roof, forfeiting a life. This adds an element of challenge, as the player cannot simply remain in the same place for too long. Furthermore, there may be several money bags above some trampolines which require 3 bounces to reach. If the player wants to maximize his score, he will need to time his jump in order to reach each bag, and immediately advance, or forfeit a life by crashing into the roof.

If the player manages to collect every single money bag, the same eagle from the first stage will return and shower Charlie with coins at the end of the stage. 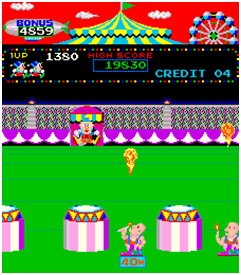 This is one of the hardest stages in the game due to the way Charlie’s jumps work. Stage 4 consists on balancing on top of a ball and then jumping onto other balls as you reach them. The trick to the stage is understanding the distance that each jump can travel, so that you may time it correctly and land each jump. In some jumps, the player may opt to skip a ball and jump onto the one directly after it, granting the player a bonus of 500 points each, though this trick requires a complete understanding of how jumps. As always, practice makes perfect. However, a good fact to know is that, when Charlie is at full speed on top of a ball, he can jump around 3 balls’ width. If the player stops to time his jump, he will then be able to jump around 2 balls’ width. 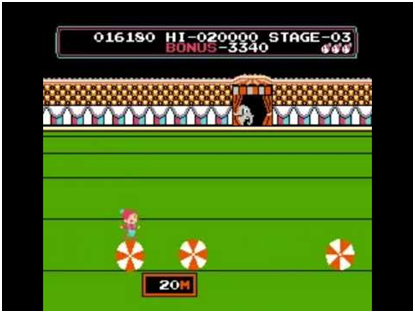 Similar to stage 3, there are no shortcuts for getting good at Stage 5’s horse hurdle challenge. In this stage, Charlie must stand on top of a speeding horse, and jump over several springboards along the way. The horse can be set to run at 3 speeds by tilting the joystick to the left, right, or leaving it in the neutral position. bonus points are awarded to the player based on the height of the current hurdle, and the number of consecutive jumps the player has cleared. There are no bonus points to be scored in this stage, so the main challenge will come from the obstacle themselves.

Remember to jump onto the platform at the end. If you run into it without jumping, you’ll lose a life! 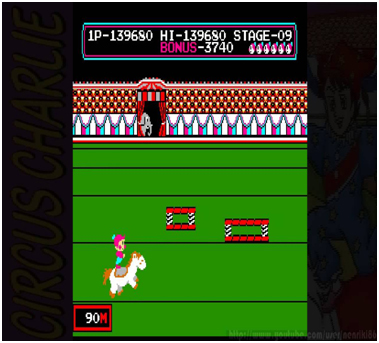 The last stage is understandably the hardest one yet! Charlie must trapeze his way around the circus tent, jumping from each trapeze the next without falling off. The stick will control Charlie’s momentum and help to steer his jump after he lets go. As a general rule of thumb, you’ll want to attempt the transition as soon as the motions of Charlie’s current trapeze and the next sync up, though this may take some practice to get right. Keep in mind that, if you release your current trapeze before reaching a 45-degree angle, you will fly farther, but not so high. Conversely, if you let go after the trapeze reaches the 45-degree angle, you will fly very high, but not as far as the alternative.

At some points of the stage, you will see some trampolines on the circus floor, if you manage to land on the trampoline, and then hang on to the following trapeze, you will receive a 2000 point bonus, though this is very difficult to achieve. 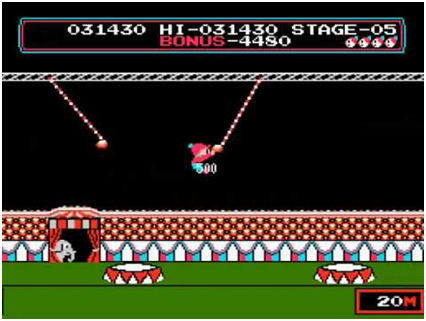 If the player manages to land on the trampoline after the second trapeze, and hang on the fourth trapeze after bouncing up (skipping the third trapeze in the process), he will receive a 5000 point bonus.

Every tenth stage, the player will be transported to a bonus stage, not unlike the third regular. The main difference is that, instead of fire breathers and jugglers, the circus floor is flooded and full of dangerous dolphins. Charlie must time his jumps to reach each trampoline while avoiding the dolphins and reach the end of the stage to collect maximum points. The dolphins can jump mainly in two heights, which can all be avoided by jumping twice on each trampoline, a strategy which is very important for the times in which they decide to attack in pairs.

In some occasions, the player will have the chance to collect money bags for bonus points. If he manages to collect every single bag, our generous eagle will fly by at the end of the stage and grant Charlie tons of points.

At PrimeTime Amusements, we’re on top of the latest news and updates in the world of arcade game sales and rentals. If you’re looking for a machine in particular, or have any questions or concerns about certain amusements, feel free to call us at 1.800.550.0090 or pay us a visit at 5300 Powerline Rd. Suite 210, Ft. Lauderdale, Florida, 33309.